Mali 'ruling nothing out' in relationship with France 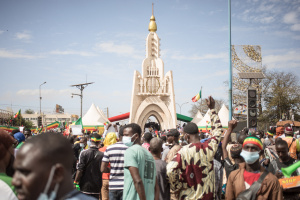 A crowd climbs the Independence Monument, the focal point of events in Bamako during a mass demonstration in Bamako, on January 14, 2022, to protest against sanctions imposed on Mali and the Junta by the Economic Community of West African States (ECOWAS). (FLORENT VERGNES / AFP)

(AFP) - Mali's Foreign Minister Abdoulaye Diop said on Friday that his government was "ruling nothing out" regarding its relations with France, amid fraught tensions between the two countries.

Speaking to French broadcaster RFI, he added that the question of French troops leaving the conflict-torn country "is not on the table for the moment."

The former colonial power has thousands of troops deployed in Mali as part of an anti-jihadist force.

The Sahel state has been struggling to contain an Islamist insurgency that first emerged in 2012, before spreading to neighbouring Burkina Faso and Niger.

Relations between the two countries have deteriorated sharply since Mali's army staged a coup in August 2020.

Earlier this month, the West Africa bloc ECOWAS imposed a trade embargo and shut borders with Mali, in a decision backed by France, the United States and European Union.

The move followed a proposal by Mali's junta to stay in power for up to five years before staging elections -- despite international demands that it respect a promise to hold the vote in February.

Diop, referring to Le Drian's statements, said that engaging with Mali should not be done via the media.

"Mali is ruling nothing out," Diop told RFI, referring to the country's relationship with France.

"The threats, the invective, the insults must stop to give way to a realistic engagement, he added.

"If a presence at a given moment is judged to be contrary to the interests of Mali, we will not hesitate to assume our responsibilities," Diop said, adding that "we are not at that point".

France and Mali's other international partners are also alarmed at the government's alleged use of Russian mercenaries.

General Stephen Townsend, the head of US Africa Command, last week estimated that hundreds of personnel from Russian private-security firm Wagner were in Mali.

Diop accused Townsend of lying, however, comparing him to former US Secretary of State Colin Powell in 2003 arguing before the United Nations that Iraq had weapons of mass destruction.

Mali's foreign minister said that cooperation with Russia was happening on a government-to-government level.