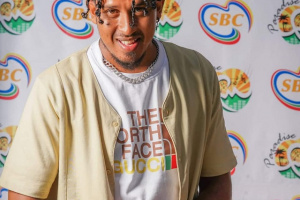 Travis and The Relations won Tune of the Year with the song "Plis ki Plis" (More than More), Most Chart Entries (Male) and the Public Appreciation Award with the song "Si ou ale" (If you go).

Four songs on his newly released album 'Lanmizik I Mazik (Music is Magic) made it to the charts and this included 'Move On' and 'Inonde' (Flooded).

SNA met with Travis Julienne to learn more about the artist and his group, which took the Paradise FM chart by storm since the release of his latest album.

SNA: How do you feel after winning the three awards?

TJ: In 2021, there were many songs released and for people to choose mine for the chart made me and The Relations proud. The fact that we are one of the teams that do not market ourselves like other artists traditionally do, shows that there is a modern way to do it that we are not exploring fully, especially with social media and online platforms.

SNA: How is your career right now?

TJ: Right now, I am focusing on music. I am concentrating on writing and composing and on building my own brand for Travis and The Relations - the magic team we call ourselves. So now we are working and getting ready for when we find a way to exploit our art in this new normal [of the COVID-19 situation].

SNA: How did you start in the music business?

Travis: I've always been into the arts but was more in the background working as a technician in the studio but then I decided that I wanted to focus on music in 2012. So, it is now 10 years since I took music as a career.

SNA: Who inspired you to become a musician?

TJ: Eddy Telemaque [owner of Relations studio] always had his door open when I said I wanted to join his music family because it was already in it.  It took some convincing but in the end, it was all worth it. So, this was my motivation. As for music, it was there inside of me, a gift from God, and I decided not to sleep on it but rather do something with it.

Now when it comes to writing, my lyrics I've followed mainly local artists. The artists I've followed were at the beginning Raggablastaz [local youth group]. It was the first group that I really listened to and then I continued with [Seychellois singers] Jahrimba and Champion. They are the founders of my lyrical style but then it evolved with other influences from [local singer] Philip Toussaint.

SNA: You sing in various genres so which one is your favourite?

TJ: I see myself more as a fusion artist. Anything that Seychellois likes to listen to I will take it and fuse it with what the world is listening to. The aim is to show that in Seychelles we can also do what they are doing abroad but with a Seychellois element. The Seychellois sega and reggae have been adopted by many of the countries in the region. So, it shows there is life in fusion until I can get one right that the world can recognise as being a Travis fusion.

SNA: What is your album 'Lanmizik I Mazik' about, from which a number of songs made it to the Paradise FM Chart Attack?

TJ: For people to understand why I did the album in such a way, they need to explore the music I made since 2013. In 2013, I was introducing my lyrical prowess and how I can penetrate the music scene. In 2016 on my album 'Pasyon' (Passion) I was experiencing with Seychellois music like the song 'Afebli' (Weakened), it's a reverse sega with a mix of jazz and blues. So, to understand this album one needs to understand the journey.

When we come to 'Lanmizik I Mazik' (Music is Magic), this shows what I consider to be the magic of the art. Music for me is a magical thing and the last album shows why I say that because my lyrics have been simplified while my music has matured. That is why around five songs on the album caught people's attention.

What is fun with the album is that it is not only the five songs that have grabbed people's attention, I believe there are others from the 18-track album that I know that if people really sit and listen to, they will understand where I started. Lanmizik I Mazik is not a simple album on its own, it is a long project. There is more coming in in 2022.

SNA: The past two years have not been easy for musicians, how have you fared during that period?

TJ: It takes a team and I think that it is now that the team is really feeling the effect of all the work we did from 2019 to 2021. We did not have time to rest and after [singer] Mia's show in 2019 we started making plans for Lanmizik I Mazik album but then it became difficult with COVID in 2020.

We were not able to rest as getting to the studio was difficult and complicated. To release an album during the pandemic, with all the red tape, cost us more than we imagined. We had to think of alternatives which is why we participated in the Dubai Expo to showcase our music and this really drained the team. We are now feeling the effect of not having rested but we cannot do it just yet because we are thinking now of how to reach people in this new normal.

SNA: You perform as Travis and The Relation, so tell us about the Relations.

TJ: It is 70 percent Eddy Telemaque and the rest of us added our own element. It is Travis and The Relations because I work very closely with my cousin Eddy and he gets the support of The Relations family which includes his uncle, his dad, and his wife. This is what has helped me grow as an artist. The Relations are an integral part of where I am today.

SNA: What would you like to see happen in Seychellois music?

TJ: Here we lack a proper framework. We have always said that but COVID showed us that without the proper framework, it was difficult to find ways that would have simplified the work of artists.

As artists, we should be concentrating on our own productions instead of thinking about laws and policies. There should be somewhere readily available to do that where we send our portfolio and they do the rest. They will sort out through the red tape and bureaucracy.

SNA: Do you need a lot to make music in Seychelles?

TJ: I am first and foremost a businessman and, frankly, during this pandemic it has been more difficult for me as an artist than to work as a businessman. It shows how difficult, really difficult it is to get ahead as an artist. Since 2012, we've been working on our programme and then with the pandemic in 2020, we could not find any way forward. It is heartbreaking. Even to host the awards, for the organisers, it was really an uphill struggle to make it happen. When we voice out our concerns people see them as personal attacks when we are just trying to find a way through.

SNA: What would you like to see happen when it comes to creation in Seychelles?