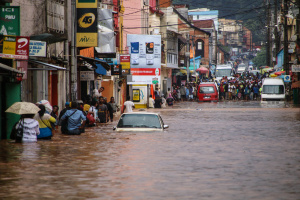 (File) The capital of Madagascar after flooding in January 2021. The tropical Indian Ocean nation and former French colony off Africa's southeastern coast is in the midst of a six-month rainy season that often results in casualties and widespread damage. (Hannibal HANSCHKE / AFP)

The victims were killed after "the floods caused landslides and houses collapsed," Sonia Ray, spokeswoman for the ministry's disaster management office, told AFP.

Two people have been injured and more than 500 displaced by the storm, according to preliminary figures released by the National Bureau of Disaster Risk Management (BNGRC)

Some 20 districts around the capital of 1.3 million are on red alert for flooding, it said, with built-up urban areas with poor drainage systems seen as especially vulnerable.

Rescue teams have been mobilised to evacuate areas at risk and prepare gymnasiums and other temporary shelters for those left homeless.

Madagascans shared pictures on social media of inundated streets with muddy water up to their thighs and wooden huts swept away.

Some were perched on perimeter walls while others navigated the flooded roads with children on their backs.

"Floods are common in Madagascar, especially during the (October/April) rainy season," said weather forecaster Lovandrainy Ratovoharisoa, "but yesterday they were exceptionally heavy -- 105.3 millimetres ( ) in one day".

"We expect a cyclone at the end of the week on the east coast," Ratovoharisoa told AFP.

The rainfall is expected to peak on Thursday but continue until the end of the month.

The country's wet-season woes are not yet over.

The tropical Indian Ocean nation and former French colony off Africa's southeastern coast is in the midst of a six-month rainy season that often results in casualties and widespread damage.

Two years ago, heavy rainfall claimed the lives of 32 people and thousands of others were displaced.

And in March 2017, at least 78 people perished in cyclone Enawo.

Global warming has increased the risk of flooding and tropical storms, as the atmosphere retains more water and rainfall patterns are disrupted.

Ironically, southern parts of Madagascar are reeling from the worst drought in four decades.

The UN's World Food Programme estimates that more than 1.3 million people there are considered to be in a food security crisis or emergency as a result.