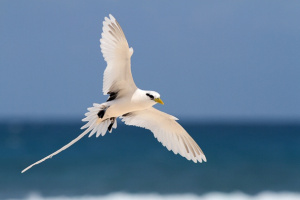 The bird was recently the subject of the first nation-wide assessment of breeding success by the Seychelles Seabird Group. (Max Aliaga, Nature Seychelles)

(Seychelles News Agency) - The white-tailed tropicbird, one of the most emblematic birds of Seychelles, found on the coat of arms of the island nation, is showing signs of potential population decline. Invasive predators such as rats and the possible impact of climate change on food supply are being cited as the main causes of the trend.

The bird was recently the subject of the first nation-wide assessment of breeding success by the Seychelles Seabird Group (SSG), a grouping of several conservation organisations, at five key nesting sites found on the outer island of Aldabra and four inner islands - Aride, Cousine, Denis, and Cousin.

According to a paper by the SSG published in the Avian Conservation and Ecology journal, considerable variation in mean annual breeding success was recorded, ranging from 15 to 55 percent, with the Aldabra population showing the lowest success. On the four inner islands, the success rate ranged between 33 to 55 percent.

The authors attributed the low breeding success on Aldabra to the presence of predators such as invasive species, primarily rats, as well as native species, which together are considered the main cause of nest failure for birds in Seychelles.

On Cousin, which is managed by Nature Seychelles, the climate factor may also be relevant, although variations in breeding success remain a mystery. The NGO's chief executive, Nirmal Jivan Shah, one of the co-authors of the SSG paper, told SNA that "we don't really know why there is a decline. They come and they nest but we don't see their chicks."

He said that climate change may contribute to the decline as they are seabirds that nest on land but feed at the sea, so changes in climate affects their food sources.

Jivan Shah added that a decline in breeding success is seen on nature reserves where there are no predators and human impact, and that on Cousin Island, "we have been monitoring those seabirds for over 30 years and we still don't know everything. This is why collaborating with other groups is vital."

One of the main achievements of the SSG study was to pool data from multiple islands to better understand species conservation status as well as encourage further monitoring in Seychelles and the western Indian Ocean region.

April Burt, the SSG Coordinator who led the study, said that "when we can only see the data from one site it may not tell us much about what is happening to this species at a wider level, but by bringing together data from multiple sites, we are able to view the bigger picture."

In the paper, the SSG proposes the adoption of a nation-wide monitoring plan that will aim to answer more questions concerning the main causes of nest failure and understanding of the factors influencing the ecosystem or population such as climate, food availability, disturbance, and habitat changes, among others.

Adrian Skerrett, chairman of the Island Conservation Society (ICS), also said that the study is vital for an understanding of "trends and fluctuations in seabird breeding success as these reflect the health of our oceans and the impact of changes in climate and food supply."