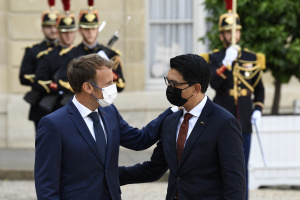 (AFP) - A Madagascar court convicted five people, including two Frenchmen, to up to 20 years in prison for plotting a coup in the Indian Ocean nation.

The defendants were among 20 people accused of trying to assassinate President Andry Rajoelina in July.

On Friday, a court found five of them guilty of plotting an assassination, compromising state security, and criminal association.

Two of them, French-Madagascan national Paul Rafanoharana and his wife Voahangy Andrianandrianina, were convicted of additional charges of illegal weapons possession.

He received 20 years, while she got five years -- both with imprisonment with hard labour.

Rafanoharana's lawyer, Solo Radson, said he would appeal, slamming the verdict as unfair.

"I did not expect this. This is an unjust verdict, based on an empty case. It's a political trial," he said.

Lawyers have three working days to lodge their appeal.

The plot was uncovered "thanks to emails, weapons and money seized" during various raids, Rabe said.

A computer file labelled "Apollo 21 budget" was discovered on Rafanoharana's computer, containing a budget for the assassination attempt. Another copy was recovered from a thumb drive belonging to Francois.

The defense tried to cast doubt on any connections between the plot and the accused, claiming that they had been denied a presumption of innocence because of numerous leaks to the media about the case.

Former colonel Francois, who ran an investment company in Madagascar called Tsarafirst, said this month that he never planned to attack the president.

"It's an insult to my honour, and to my intelligence, to think that I had something to do with Apollo 21," he said.

Francois, Rafanoharana and their wives were arrested on July 20 and imprisoned in early August after a long period in police custody.

Francois and his wife said they were planning to move to France when they were arrested at the airport.