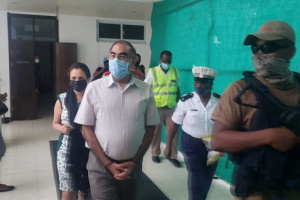 The $50 million was granted to the government of Seychelles, an archipelago in the western Indian Ocean, by the United Arab Emirates in 2002. The fund was transferred to a bank account of the Seychelles Marketing Board (SMB), now the Seychelles Trading Company (STC), in a Baroda bank in England.

The third accused in the case, Andre Leslie Benoiton, a senior officer in the Seychelles Defence Forces, was charged with money laundering for corruptly obtaining $100,000 by way of payment from Mukesh Valabji without lawful authority or excuse.

All three also face terrorism charges as a result of a cache of arms found at their residence at Port Glaud, on the main island of Mahe.

The three others charged for money laundering are Lekha Nair, a former director general in the Ministry of Finance at the time the funds went missing; Maurice Loustau-Lalanne – a former government official; and Sara Zarqhani Rene, the widow of former President France Albert Rene.

The Anti-Corruption Commission of Seychelles -- the body responsible for bringing the case to court -- claimed that Nair is believed to have allowed the money to be diverted into bank accounts set up for the personal and private use of Mukesh Valabhji, leading to her official corruption charges.

Bail for Nair, Loustau-Lalanne and Zarqhani were granted while the Valabji couple and Benoiton will remain in police detention for at least another 14 days.

Chief Justice Rony Govinden, the presiding judge in the case, said that he had strenuously scrutinised the charges and paid close attention to the submissions of the learned counsels before setting the bail conditions for the three accused charged mainly in the corruption case.

Nair has been released after paying a SCR50,000 ($3768) bail bond; she must also report to the Beau Vallon Police Station on Monday at 5 pm.

Bail for Zarqhani who has been charged with the offence of money laundering and concealment of property has been set at $2 million with two sureties of $1 million each.

Govinden said the bail was set so high due to Zarqani Rene being a high net worth individual with influences both locally and abroad and that "there is a greater propensity of absconding and interfering with the case."

Zarqhani Rene told SNA that "of course I won't pay it! Where will I get the money from?"

All six accused are scheduled to reappear before the Supreme Court on December 30.