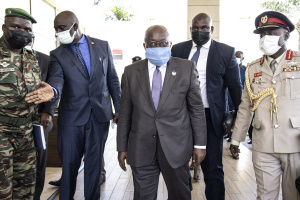 President of Ghana Nana Akufo-Addo (C), who is representing the Economic Community of West African States (ECOWAS), arrives for a meeting with Junta President of the National Committee for Rally and Development (CNRD) Colonel Mamady Doumbouya in Conakry on September 17, 2021. Colonel Mamady Doumbouya's special forces on September 5, 2021 seized Alpha Conde in a Coup, the West African state's 83-year-old president, a former champion of democracy accused of taking the path of authoritarianism. (JOHN WESSELS / AFP)

(AFP) - Leaders of the West African bloc ECOWAS have called on Guinea's military junta to provide a timetable for elections that would lead to a return to civilian rule.

The bloc's leaders issued a statement on Monday saying it remained "very concerned that three months after the coup d'etat, a timetable for the return of constitutional order is yet to be issued".

The bloc insisted on the need for the regime to hold elections within six months, as they have previously stated. In the meantime, it said, it would maintain the sanctions already imposed.

Monday's statement came a day after the bloc's leaders gathered in Nigeria for a summit.

ECOWAS has suspended Guinea from the bloc and imposed sanctions on individual junta members and their families in retaliation for the September 5 coup that deposed president Alpha Conde.

Junta leader Mamady Doumbouya has installed himself as transitional president and set up a government with Mohamed Beavogui, a former UN under-secretary-general, as its transitional prime minister.

Although 41-year-old Doumbouya, a former French legionnaire, has promised to return the country to civilian rule, he has refused to be pinned down on a timetable.

He has said that will be decided by the national council that will act as the country's parliament but that the authorities told ECOWAS was not due to be up and running until the end of the year.

The speed of establishing the National Transition Council (CNT) would depend on the promptness of all parties in appointing their representatives in accordance with their quotas, the junta said in a statement late Monday.

It had however noted difficulties linked to the large number of candidates put forward for the CNT, with 706 applications registered for the 81 members to form the body.

Due to the time required for negotiations, it would not be possible to commit to establishing the CNT before the end of the year, it said.

ECOWAS did, however, welcome the news that Conde himself had been released after 12 weeks. According to press reports, he is still under surveillance but living with his wife in a Conakry suburb.

Conde became Guinea's first democratically elected leader in 2010, but last year sparked mass protests when he changed the constitution to allow himself to seek a third term.

Though Conde was re-elected, his critics denounced the poll as a sham.