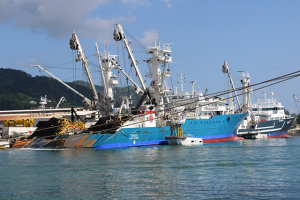 (Seychelles News Agency) - Seychelles will increase the license and authorisation fees it charges purse seiners bearing the island nation's flag under a new agreement with the owners as of January 1, a top official said on Tuesday.

The Principal Secretary for Fisheries, Roy Clarisse, told a press conference that the only legal framework that existed until recently was that these vessels are registered under the Seychelles Maritime Safety Authority.

As of January 1, there will be an increase of 35 percent in the fees paid to Seychelles in order to not only fish in island nation's waters but also to bear its flag on fishing expeditions carried out in foreign waters.

There are currently 13 purse seiners bearing the flag of Seychelles, an archipelago in the western Indian Ocean. They are mainly from Spanish and French owners.

Under the agreement, everyone involved in such fishing activities is aware of the parametres they fish under, the conditions to do so, where they should land their catch as well as what authorisation they will need from the Seychelles Fishing Authority (SFA) should they do so in a jurisdiction outside of the country.

The last time the fees charged for foreign vessels bearing the Seychelles flag was revised was in 2009 when the purse seiners were paying $90,000 annually to fish tuna from the archipelago.

The increase is expected to generate around 1.56 million euros for the fisheries sector which is the second top contributor to the Seychelles' economy.

Clarisse said that another benefit that the agreement will bring is that "we have also made sure that future fish processing plants are also catered for. We have also included provisions that they supply our local processing plants such as the Indian Ocean Tuna (IOT) factory, existing plants that deal with by-catches."