Data on Seychelles' seagrass, a vital carbon sink, is shared at climate conference 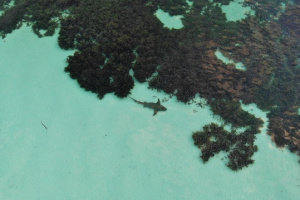 Seagrass is one of three blue carbon ecosystems and n Seychelles. (Mathew Morgan)

Jeanne Mortimer, the lead consultant told SNA that the information will also be used when Seychelles discusses issues surrounding its carbon footprint with other countries.

The Seychelles' seagrass and carbon mapping project costs around $1 million and is spearheaded by the Seychelles Conservation and Climate Adaptation Trust (SeyCCAT).

Seychelles, a group of 115 islands in the western Indian Ocean, has an Exclusive Economic Zone (EEZ) of 1.4 million square kilometres but has very limited data on its seagrass meadows.

Mortimer pointed out that "we have general ideas of where it is easy to find seagrass, but there is still so much to learn, and some of it we will only be able to tell when we are on the seabed."

She said this is why this study was important as "you can't have a healthy marine environment without having a healthy seagrass environment, but people tend to take that for granted, going oh yeah it's just seagrass!"

Seychelles has also embarked on an ambitious journey to protect 100 percent of its seagrass habitats by 2030.