S.Africa to get $8.5 bn from rich nations to give up coal 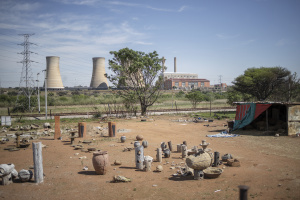 The towers of the coal-fired Rooiwal Power Station are seen on the outskirt of Pretoria, on October 13, 2021. (Michele Spatari / AFP)

(AFP) - Coal-dependant South Africa on Thursday announced it was ploughing 50 billion rand ($3.3 billion) into 25 wind and solar projects in an effort to shift towards clean energy and boost production.

Energy minister Gwede Mantashe said the deals with private producers would add 2,583 MW of contracted capacity to the grid -- a boost of roughly 4.5 percent on current capacity.

"More investment in grid infrastructure is a critical requirement to ensure participation by cheaper renewable projects in future," he told a news conference.

The first projects are not expected to come on line until April 2024 at the earliest.

The continent's most industrialised nation is struggling to meet its energy needs.

Rolling blackouts, a part of life since 2007, are hampering economic growth and stifling job creation in a country with more than 34 percent unemployment.

The ruling African National Congress admitted it was facing a voter backlash over the blackouts, as it struggles to rally support for local government elections next week.

The country is seeking to highlight its efforts to wean itself off coal in the run-up to the UN's COP26 climate summit in Scotland.