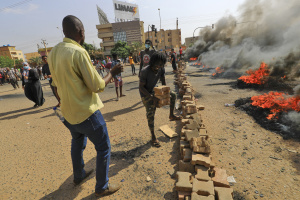 Sudanese protesters burn tyres to block a road in 60th Street in the capital Khartoum, to denounce overnight detentions by the army of members of Sudan's government, on October 25, 2021. Armed forces detained Sudan's Prime Minister over his refusal to support their "coup", the information ministry said, after weeks of tensions between military and civilian figures who shared power since the ouster of autocrat Omar al-Bashir. (AFP)

(AFP) - Sudanese security forces on Wednesday made sweeping arrests of protesters as they sought to extinguish opposition to this week's military coup, while the international community ramped up punitive measures.

The World Bank froze aid and the African Union suspended Sudan over Monday's power grab by the army, just over two years into what is meant to be a transition to civilian rule after the April 2019 ouster of autocrat Omar al-Bashir.

Hundreds of protesters were seen throwing rocks at security forces dismantling street barricades in Khartoum's eastern district of Burri, according to an AFP correspondent.

In the capital's north, security personnel fired tear gas and rubber bullets at dozens of protesters.

"Police forces have removed all the barricades since Wednesday morning and arrested all the people who stood near them," said Hady Bashir, a protester.

Later Wednesday, the information ministry -- still loyal to the deposed government -- said security forces were tightening their control of the capital.

"Neighbourhoods and streets have been blockaded by armoured vehicles and men carrying rifles," it said in a statement, alleging also that "women were dragged" to the ground.

"All security on the streets now look like the Bashir-era forces," lamented one protester.

Top General Abdel Fattah al-Burhan's dissolution of the government and declaration of a state of emergency on Monday has provoked strong reactions far beyond the country's borders.

On Wednesday, the AU bloc called the coup "unconstitutional" and suspended the country's membership.

The World Bank later put its aid on hold, in a major blow to a country that only recently unlocked funds from the lender and its sister institution the International Monetary Fund, after decades under sanctions during Bashir's rule.

The United States has also paused $700 million in funding and the European Union has threatened to follow suit.

Hamdok was detained by the military in sweeping arrests of civilian leaders on Monday, but was allowed home on Tuesday, as major donors demanded his release.

But UN spokesman Stephane Dujarric said on Wednesday the premier was "not free" and confined to his residence, after Volker Perthes, the UN's Special Representative for Sudan, met with both Hamdok and Burhan.

Other ministers and civilian leaders remain under full military arrest.

A joint statement by the US, EU, Britain and other nations emphasised their continued recognition of the "prime minister and his cabinet as the constitutional leaders of the transitional government".

US Secretary of State Antony Blinken on Wednesday spoke with Sudan's Foreign Minister Mariam al-Mahdi to "solicit her views about what steps the United States can take to support the Sudanese people in their call for a civilian-led transition to democracy", the State Department said.

The UN Security Council, however, has struggled to agree a joint statement on Sudan's crisis. Russia opposed a strong condemnation of the military's power grab, diplomats said.

Russia's deputy representative to the UN Dmitry Polyanskiy said negotiations were continuing and described the matter as "very delicate".

Sudan had been ruled since August 2019 by a joint civilian-military council, alongside Hamdok's administration, meant to shepherd the country to full civilian rule.

But analysts had said the role of the civilians receded before the coup, which the experts view as the generals' way of maintaining their long-held grip on the country.

A splinter group of the civilian side aligned with the military just before its putsch.

The coup was the latest in a succession that have hit the underdeveloped nation, which has experienced only rare democratic interludes since independence in 1956.

Burhan has been Sudan's de facto head of state since Bashir's ouster, but was also a senior general during the autocrat's three-decade-long hardline rule.

Four people were killed and scores wounded on Monday when soldiers opened fire on protesters, according to an independent doctors' union.

Violence against protesters has mounted in a "vengeful" crackdown by security forces, said the Sudanese Professionals Association (SPA), a union umbrella instrumental in the anti-Bashir protests.

Internet services have been largely blocked and civil aviation authorities said Khartoum airport, which has been closed to flights, reopened Wednesday, but it was not immediately clear if any airline scheduled flights to Sudan.

Shops have remained closed following calls for a civil disobedience campaign and pro-democracy movements ratcheted up calls for "million-strong protests" on Saturday.