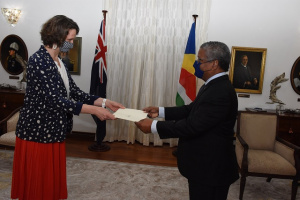 (Seychelles News Agency) - The blue economy, climate change and COVID-19 vaccination rates are some of the areas the newly accredited Australian high commissioner to Seychelles touched on in talks with the island nation's leaders.

"Over the last few years, there has been increased cooperation between our two countries on developing the blue economy. Australia's peak scientific research body CSIRO (the Commonwealth Scientific and Industrial Research Organisation) and the Seychelles Fishing Authority signed an MoU in 2017 and I am pleased that they are launching a project tomorrow on biodiversity conservation in the Indian Ocean," said O'Shaughnessy.

On the upcoming COP26, she said that the conference is of great importance for both countries and that Australia particularly supports Seychelles very strongly in promoting the idea that Overseas Development Institute eligibility is not necessarily the right criteria to look at the development of Small Island States.

"We need to think more carefully about Small Island States vulnerability and support them to weather these changes. Australia is really looking forward to partnering with Seychelles on this important issue," she continued.

O'Shaughnessy also paid a visit to the vice president of Seychelles, Ahmed Afif, and discussions touched on the island nation's success in managing COVID-19.

"Australia in fact looks to Seychelles in terms of a good example of how to bring vaccination rates up and open up the economy safely. Australia is still closed but looking forward to opening our borders partially in a couple of weeks' time and as such, it is really useful to learn from the vice president how Seychelles has approached this problem. We also talked about Seychelles' efforts to diversify the economy," said O'Shaughnessy.

Australia is committed to working closely with Seychelles on maritime security, economic growth and sustainable development, including through the Indian Ocean Rim Association and the Commonwealth Climate Finance Access Hub.

Education also remains a top area of cooperation between Australia and Seychelles, an archipelago in the western Indian Ocean. The Australia-educated Seychellois alumni population represents one of the largest regional Australian alumni communities. Many are prominent in both the public and private sectors. There are over 2,500 Seychellois living in Australia among whom are first, second and third-generation Seychellois.

O'Shaughnessy who will be based in Mauritius for her three-year term. She succeeds Jenny Dee, who recently returned to Australia.