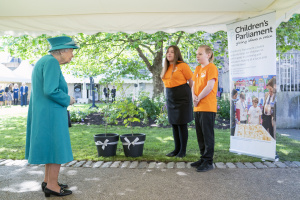 Members of the Children's Parliament present trees to Britain's Queen Elizabeth II during a visit to the Edinburgh Climate Change Institute at the University of Edinburgh in Edinburgh, Scotland on July 1, 2021, as part of her traditional trip to Scotland for Holyrood Week. (Jane Barlow / POOL / AFP)

(AFP) - Queen Elizabeth II has taken aim at world leaders who "talk" but "don't do" enough about climate change, in an apparent jibe at those not attending the upcoming COP26 summit.

The 95-year-old monarch was overheard making the remarks on a microphone as she opened the Welsh Assembly in Cardiff on Thursday.

She told Elin Jones, the parliament's presiding officer: "Extraordinary isn't it. I've been hearing all about COP... still don't know who is coming. No idea.

"We only know about people who are not coming ... It's really irritating when they talk, but they don't do."

All eyes are on the two-week UN climate summit in Glasgow, which starts on October 31, and whether Xi Jinping, leader of the world's biggest emitter, China, will attend.

It is also unclear if Narendra Modi, prime minister of the world's third-highest emitter of greenhouse gases, India, will be at the conference either.

The queen's comments come after public interventions this week from both her eldest son and heir, Prince Charles, and her grandson, Prince William.

Long-time environmentalist Charles told the BBC in an interview broadcast Monday he worried world leaders would "just talk", rather than implement "action on the ground".

William, in a separate interview with the broadcaster aired on Thursday, called for more than "clever talk" -- and blasted space tourism.

"We need some of the world's greatest brains and minds fixed on trying to repair this planet, not trying to find the next place to go and live," he added.

Welsh politician Jones told the Queen that she had seen William on the television "saying there's no point going to space, we need to save the Earth".

The queen smiled and replied: "Yes, I read about it."

She, Charles, William and other senior royals are all due to attend events at the upcoming summit.

The gathering will try to persuade major developing economies to do more to cut their carbon emissions, and get the rich world to cough up billions more to help poorer countries adapt to climate change.