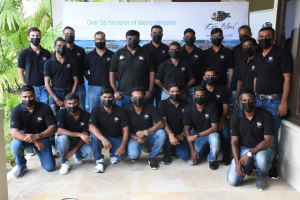 Team Seychelles eft the country on Wednesday for the seven-day tournament. (Seychelles Nation)

(Seychelles News Agency) - A cricket team from Seychelles will participate in the T20 World Cup Africa qualifier tournament in Kigali, Rwanda from October 16 to 17.

Team Seychelles left the country on Wednesday for the seven-day tournament in which the island nation will play in the sub regional Africa A qualifier alongside Rwanda, Ghana, Lesotho, Malawi, Eswatini and Uganda.

The chairman of the Seychelles Cricket Association, Jonathan Paul, said: "I am confident that we will do well as this selection is very good."

Paul said that the Seychelles' team has the qualities needed to qualify for the T20 World Cup in 2022.

The team received its official kits earlier this week sponsored by a number of local companies including Eden Island Development company, Vijay Construction, Mohan Shopping Centre and Avani Barbarons among others.

In 2011, Seychelles was promoted to Africa division two of the former qualifying tournament for the ICC T20 World cup and Paul says that he believes the island nation has come a long way since then.

Although the preparation for the Seychelles' selection was hampered by the COVID-19 pandemic, Paul told SNA that the team managed to find ways to train.

"We have trained in groups for the past weeks and despite this, we feel that the players are in a good state of mind and should give a good account of themselves in Rwanda," said Paul.

The sub-regional tournament, which serves as a qualifier for the 2022 T20 World Cup, is being organised by the Rwanda Cricket Association in collaboration with the International Cricket Council (ICC) and the Africa regional finals.

The matches will be played at the Gahanga International Cricket Stadium and the Integrated Polytechnic Regional College (IPRC).

Botswana, Cameroon, Mozambique, Sierra Leone and Tanzania will play the group B qualifier from October 31 to November 8.

The top team from both groups will advance to Africa regional finals, where they will compete with Nigeria and Kenya for the lone qualification spot in the ICC Men's T20 World Cup qualifier in 2022.

If the team from Seychelles, an archipelago in the western Indian Ocean, gets through this round, it will head back to Rwanda in November to continue its qualifying campaign.

Cricket in Seychelles remains a sport practiced mostly by Seychellois of Indian origin but Paul said that the teams now have other Seychellois players joining.

He said that the Association will continue to bring cricket to more young children, although in recent years it has been difficult to retain their interest in the sport once they get older.

"We want to develop an interest in the sport and we think that if we can get the youth to enjoy cricket, then we will have more people wanting to join," said Paul.