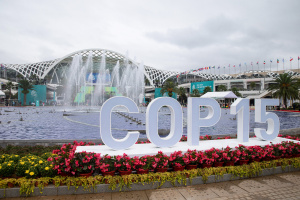 The venue of the UN Biodiversity Conference (COP 15) is seen in Kunming, in China's southwestern Yunnan province on October 11, 2021. (STR / AFP)

Beijing, the world's biggest polluter, has sought to position itself in recent years as a world leader on environmental issues after Washington's withdrawal from international commitments under the Trump administration.

The online summit -- setting the stage for a face-to-face meeting in April -- will see parties to the Convention on Biological Diversity (CBD) discuss new targets for protecting ecosystems by 2030.

Up for debate are the "30 by 30" plan to give 30 percent of land and oceans protected status by 2030 -- a measure supported by a broad coalition of nations, as well as a goal to halve the use of chemicals in agriculture and stop creating plastic waste.

"While there have been some success and progress, there have not been the breakthroughs needed to halt the ongoing loss of plant and animal diversity on earth," CBD executive secretary Elizabeth Maruma Mrema warned at the opening session in the southwest city of Kunming.

"We must take actions this decade to halt and reverse biodiversity loss and put biodiversity on a path to recovery by 2030 the latest."

China has not yet committed to the "30 by 30" plan, despite implementing an "ecological protection red line" system that already puts 25 percent of its territory out of the reach of developers.

This year's COP15 gathering was originally set for 2020 and postponed due to the Covid-19 pandemic.

Around one million animal and plant species are threatened with extinction amid human encroachment on habitats, over-exploitation, pollution, the spread of invasive species, and climate change.

The CBD has been ratified by 195 countries and the European Union -- although not the United States, the world's biggest historical polluter -- with parties meeting every two years.

Beijing is expected to unveil a statement known as the Kunming Declaration to set the tone for its environmental leadership.

Vice Premier Han Zheng said at the opening session that over 11,800 protected areas have been set up, accounting for 18 percent of China's land mass.

But sharp divisions remain over the targets for urgent action over the next decade, casting doubts on whether a 2050 deadline to "live in harmony with nature" can be achieved.

France and Costa Rica are among a coalition of support for the initiative to declare 30 percent of oceans and lands protected areas before 2030.

But when scientists called for more ambitious protection of half of Earth's biodiversity, Brazil and South Africa strongly opposed.

Other sources of tension surround financing, with developing nations asking rich countries to foot the bill for their ecological transitions and will be taken up at negotiations in Geneva in January 2022.

Global leaders have so far failed to achieve a single target to stem the destruction of wildlife and life-sustaining ecosystems set for the last decade, according to a devastating UN report released last week.

The biodiversity discussions at COP15 are separate from weightier COP26 summit set to begin next month in Glasgow, where world leaders are under pressure to act on the climate crisis.