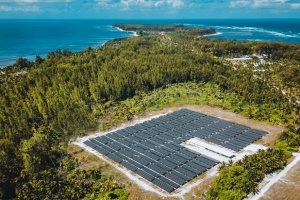 The farm is the second-largest solar plant in Seychelles after the one on Ile de Romainville, a man-made island. (Four Seasons Resort Seychelles)

The solar farm on Desroches was inaugurated on Saturday by President Wavel Ramkalwan and chairperson of the IDC board of directors, Patrick Berlouis. The farm is the second-largest solar plant in Seychelles after the one on Ile de Romainville, a man-made island.

With tourism being the number one economic driver of the island, followed by agriculture, Desroches is home to a branch of the Four Seasons resorts chain which consumes almost half of the electricity generated by the solar farm.

The resort manager, Nick Solomon, said that when the generator was running, the resort "was using around 55,000 litres of diesel per month and with the solar plant we are expecting a reduction of about 90 percent."

"This is a huge change for us. As a company, Four Seasons is very focused on sustainability and to have our resort run almost exclusively off renewable energy is something very exciting for us and something that we are very proud to be a part of," said Solomon.

"The only money that IDC spent was to build the pillar onto which the PV panels stand, and the building that houses the equipment. We just buy electricity at a cost of $0.19 per kilowatt, as compared to $0.42 when the generators were operating," said Savy.

Covering 394 hectares, Desroches is the largest island in the Amirantes group and the closest to the granitic islands, lying 230 kilometres southwest of Victoria. The solar farm on Desroches is the fourth and biggest installation on the outer islands managed by  IDC.

The chairperson of the IDC board of directors, Patrick Berlouis, said that one of the company's strategic objectives is to explore and introduce renewable energy projects on the islands in an effort to reduce reliance on fossil fuels and reduce operating costs.

"Since 2018, with the installation of the solar farm on Alphonse, we have been pursuing this objective with a passion. Earlier this year in April, we commissioned smaller solar plants on Astove and Farquhar, and today it is the turn of Desroches. We can proudly say that the country and IDC in particular is doing its very best to curtail the use of fossil fuel," said Berlouis.

Seychelles' Platte island will be the scene for the next stage of IDC's energy masterplan in which the company will supply the 42-room resort presently under construction. The system will also produce 2.5-megawatt of electricity but interestingly, part of the installation will be on the lagoon.

At the same time, IDC plans to set up smaller systems on the islands of Poivre, Marie-Louise, Desnoeufs, and Remir, while on Coetivy an initial 50-kilowatt modular system will be set up and this will grow as economic activities develop on that island.

During the first quarter of 2023, with the opening of the resort on Ile Plate, 98 percent of all power generated on the IDC outer islands will be from the sun.

The climate change and energy minister, Flavien Joubert, launched a challenge to other inner and outer private islands to to aim for 100 percent renewable energy.

Joubert said that what is important in this equation is financing and IDC has come up with an innovative approach.

"IDC has come up with an independent power producer solution that provides competitively priced power without the large upfront financial burden that most people complain about when talking about renewable energy. This is the kind of experience that should be shared with different partners to help them make the very critical decision of embarking on a journey to increase the use of renewable on their island," said Joubert.

Joubert said that with a growing population, the demand for electricity and water will increase drastically in Seychelles, an archipelago in the western Indian Ocean.

A target of 15.5 percent of energy efficiency and 15 percent renewables by 2030 has been set.

"Seychelles is currently producing about 5 percent renewable energy and will need to scale up to an additional 10 percent in this decade to take into account economic growth. Our recent revised National Determined Contributions sets an even more ambitious target of being net-zero by 2050," said Joubert.