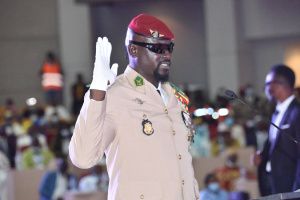 (AFP) - Lieutenant Colonel Mamady Doumbouya, the leader of the latest coup in Guinea who was sworn in Friday, is a highly educated, combat-hardened soldier who once served in France's Foreign Legion.

Doumbouya says he has no designs on the presidency long-term and that neither he nor his fellow coup plotters will stand for election at the end of a transition period, whose length remains unspecified.

His administration's mission is to "refound the state" he said, by drafting a new constitution, fighting corruption, reforming the electoral system and then organising "free, credible and transparent" elections.

The new president also promised to "respect all the national and international commitments to which the country has subscribed."

The 41-year-old hails from the eastern region of Kankan and belongs to Conde's Malinke -- also known as Mandinka -- community.

Doumbouya's special forces announced the coup on September 5 after seizing Alpha Conde, the West African state's 83-year-old president and a former champion of democracy accused of taking the path of authoritarianism.

Sporting his trademark red beret and sunglasses, Doumbouya announced the dissolution of the constitution, whose changes had enabled Conde to secure a bitterly contested third term in office.

And he pledged to oversee an "inclusive, peaceful transition," saying that "there have been many deaths for nothing, many wounded, many tears," under Conde's rule in a bloody crackdown on protests.

In an insight into his thinking, Doumbouya last month invoked Ghana's late firebrand leader, Jerry Rawlings, who took power through a coup in 1981 before overseeing a shift to democracy.

"If the people are crushed by their elites, it is up to the army to give the people their freedom," said Doumbouya, quoting Rawlings.

The man who has stepped into the spotlight is a career army officer in his early forties who earned a master's degree in defence and industrial dynamics at Paris's Pantheon-Assas University.

He trained at France's Ecole de Guerre military academy and was a member of the fabled Foreign Legion.

In his career, he has taken part in missions to Afghanistan and the deeply troubled Central African Republic.

His unit, the Special Forces Group, had only just been created when in 2018 its balaclava-clad men marched at a 60th anniversary parade overseen by the president whom they would topple three years later.

Doumbouya is married to a Frenchwoman and has three children, according to Guinean media.

"We are not here to have fun with power, we are not here to play, we are going to learn from all the mistakes which have been made," he told French broadcaster France 24, referring to past coups that deeply scarred the nation.

The former head of the 2008-09 military junta, Captain Dadis Camara, had a fleeting turn in the limelight marked by bizarre TV appearances that became nicknamed the "Dadis Show".

In September 2009, troops massacred opposition supporters at a stadium in the capital Conakry. At least 157 were killed, while 109 women were raped.

Using a risky metaphor, he said: "Guinea is beautiful. We don't need to rape Guinea anymore, we just need to make love to her."

Doumbouya hit out at corruption and waste, and vowed to restore peace in a country battered by crackdown after crackdown.

But diplomats and local media said an underlying trigger for the coup may have been a showdown with the government over the defence ministry's control over the special forces.