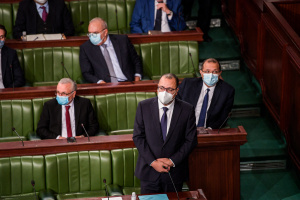 Tunisian Prime Minister Hichem Mechichi (front row), mask-clad due to the COVID-19 coronavirus pandemic, attends the presentation of his new ministers before the Tunisian Assembly (parliament) headquarters in the capital Tunis on January 26, 2021.
(FETHI BELAID / AFP)

Bouden, a university lecturer and political unknown, will take office after President Kais Saied on July 25 sacked the government of Hichem Mechichi, suspended parliament, lifted MPs' immunity and took over the judiciary.

His moves followed months of political deadlock in the face of a pressing economic crisis and mounting coronavirus deaths.

While some Tunisians have supported his decisions against a reviled political class, he has faced repeated calls to name a government.

On Wednesday, German Chancellor Angela Merkel spoke to Saied, where she stressed that "a return to parliamentary democracy in dialogue with all political actors is essential", her office said in a statement.

Last week, Saied extended the suspension of parliament and moved to rule by decree, suspending parts of the country's post-revolution constitution.

Saied's office on Wednesday published a video of him meeting Bouden, and charging her with presenting a cabinet "in the coming hours or days".

The president, who will head the cabinet, repeatedly emphasised the "historic" nature of the nomination of a woman, calling it "an honour for Tunisia and a homage to Tunisian women".

Saied, who was the only person to speak in the video, said Bouden's main mission would be to "put an end to the corruption and chaos that have spread throughout many state institutions".

"When we look at the CV of this lady, who is a geologist without other specialisations or experience in sensitive roles, I don't know how well she will be able to tackle these enormous, complex issues," he told AFP.

Jourchi said that by appointing Bouden, Saied "has avoided nominating a politician or anyone with a minimum of political experience. He doesn't want a rival or anyone with political opinions, who could enter discussions with him over the important decisions to come."

Some women in Tunis welcome Bouden's appointment, but media student Yasmine Benhassen said "that doesn't mean that we will support her whatever happens".

"We'll pay attention to who she is, and what she does," the 21-year-old told AFP.

Raoua Gorab, a jobseeker in her 30s, said the key issue was "improves the situation in the job market. After the coronavirus pandemic, there's nothing left, everything has closed."

With debt approaching 100 percent of GDP as it negotiates with international lenders for a bailout, Tunisia has faced years of runaway inflation and high unemployment, exacerbated by the coronavirus pandemic.

The country has won international plaudits for its democratic transition, but many Tunisians have seen little improvement in their lives and have become disillusioned with a political process they say is dysfunctional and corrupt.

The French-educated geologist with a PhD in geological engineering comes from the city of Kairouan, and is a lecturer at Tunisia's national engineering school.

Tunisia has for decades been seen as a regional pioneer in women's rights, banning polygamy in 1956.

The Tunisian Association for Democratic Women (ATFD) welcomed Saied's pick for prime minister, saying it had suggested Bouden for the role.

During the socially conservative constitutional law expert's 2019 presidential run, he was criticised for his opposition to an inheritance law enshrining equality between men and women.

Also an academic and political outsider, Saied swept to power on a wave of anger against the political class, who have governed Tunisia since 2011 but failed to resolve pressing economic and social issues.

While many Tunisians praised his initial power grab, on Sunday more than 2,000 people demonstrated in central Tunis to demand a return to the constitution and Saied's resignation, accusing him of "stealing" the 2011 revolution.