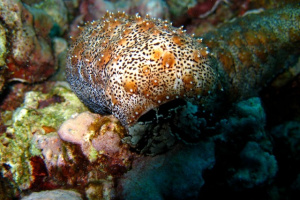 During the study will determine the exact species in the Seychelles' waters. (Greg Tee, Flickr) Photo License: CC BY-NC 2.0

(Seychelles News Agency) - The Seychelles Fishing Authority (SFA) will launch a study in November to determine the stock and the exact amount of the species of sea cucumber found in the island nation's waters.

Representatives of the authority shared their plans with sea cucumber fishing licence holders and skippers on Wednesday.

The last independent study Seychelles conducted to determine the exact stock of sea cucumbers in its waters was in 2004/05 and this was done without the involvement of the fishermen.

This time, SFA is requesting the help of the harvesters themselves, whom they say "have the required skills needed to identify the species and their location in the sea," said principal fisheries research officer, Ameer Ebrahim.

The team undertaking the study is made up of Seychellois members and an Australian consultant who has provided SFA with the Vessel Monitoring System (VMS) map needed to conduct the study.

Two hundred sites in the Mahe and Amirantes plateau will be sampled for the purpose of the study and these will include shallow areas. Areas 60 metres deep will be excluded. The study is expected to be completed in February next year.

The fisheries researcher working on the project, Stephanie Hollanda, said that "once all the data is collected, it will enable the authorities to make management decisions as well as determine the proper policies needed to ensure the sustainability of the sea cucumbers."

In addition to the SFA divers also taking part in the exercise, the fishermen and a remotely operated vehicle will also participate.

SFA hopes that by the time it completes the study, there will be a 60 percent precision in the data that it collects for the study.

Once this is done, comparisons will be made determining the difference in stocks in fished and unfished areas.

Ebrahim said that "the main weakness in the last study was the fact that the fishermen were not included in the data gathering exercise."

During the study, samples of sea cucumbers will be weighed, their gonads -- the primary reproductive organs -- will be extracted as well as DNA samples will also be taken for further analysis.

Meanwhile, SFA also informed the fishermen that the sea cucumber fishing season will start October 8 instead of the 1st and those with a licence can start making payment now.

For this season, the quota will be 10 percent lower for the flower teat fish species (Holothuria Microthele), one of the three types of sea cucumber targeted in Seychelles, an archipelago in the western Indian Ocean. The Seychelles Fishing Authority decided to reduce the quota as fishermen were not able to meet the previously set one which was 281,250 pieces of flower teat fish in total. The new quota is 253,125, SFA told boat owners and skippers at the beginning of September.