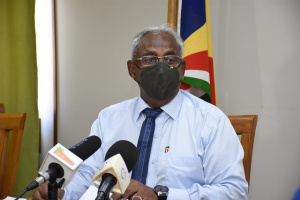 (Seychelles News Agency) - A failure to stop a Seychellois man who had unresolved tax issues from leaving the country suggests that there could be an element of corruption present in government operations, said a top official on Monday.

The Minister for Internal Affairs, Errol Fonseka, was answering questions brought forth by Ralph Volcere, editor of the Seychelles Independent newspaper.

In his letter to the minister, Volcere requested a press interview in regards to the owner of a construction company whom he said "fled to Kenya to avoid complying with court rulings and there was a warrant out for his arrest."

Volcere said the Seychellois man "was allowed to enter the country just a few weeks ago and allowed out again without the intervention of the law enforcement agencies, which includes both the police and the immigration, which (are) two agencies directly under your portfolio."

The minister said that after the departure of the Seychellois male, his department dug further and new information has shown that there was another case from 2018 that should have alerted the immigration officers, but somehow this was missed.

"This case from 2018 is for a serious matter relating to unresolved tax arrears and the alert should have been picked up by the officer. How it was not picked up remains unclear, but I will be sending the case to the Anti-Corruption Commission of Seychelles (ACCS), to investigate," added Fonseka.

The Anti-Corruption Commission of Seychelles is a body created to investigate and prosecute matters relating to corruption in the island nation in the western Indian Ocean.

The minister shared his concerns that these alerts should have also been picked up upon the man's arrival in the country and this is a matter he will have to deal with.

Fonseka said his investigations have shown that there were no warrants issued for the man's arrest.

"What we know now is that the man is out of the country at the moment and he has a court date scheduled for October 6, and if he does not show up and the court gives a warrant for his arrest, then we will take it up and deal with the matter," he said.