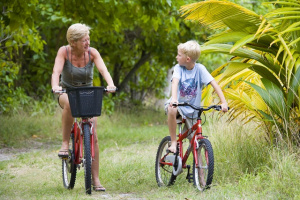 Hassan said that "the tourism sector is doing better than we anticipated at the beginning of the year." (Gerard Larose, Seychelles Tourism Board)

(Seychelles News Agency) - Seychelles has collected more revenue than anticipated in the first six months of 2021 thanks to a substantial increase in visitors to the island nation since March, said a top government official.

The finance minister, Naadir Hassan, presented the mid-year budget review to the National Assembly on Tuesday.

Hassan said that since Seychelles re-opened its borders in March this year "we've seen that the tourism sector is doing better than we anticipated at the beginning of the year. We had forecast a domestic growth of 2.08 percent but with new development in the tourism sector we have revised our projection to 6.72 percent."

He said that this year, the Assembly approved a budget of SCR11 billion and the government expected to make a primary fiscal deficit of 11.8 percent.

"Based on the performance of the first six months and new projection for the year, we anticipate a primary fiscal deficit of 7.6 percent of our Gross Domestic Product (GDP). This an amelioration of 4.2 percent of our GDP or SCR868 million ($59.4 million)," he added.

The finance minister said that this is more favourable than what Seychelles agreed with the International Monetary Fund (IMF) and "that gives us hope and confidence that we are in the right direction towards a more sustainable debt. But we always have to remember that we are still in an uncertain period with the COVID-19 pandemic."

On the fiscal performance, the minister said that from January to June Seychelles has attained a primary deficit of 2.7 percent of the Gross Domestic Product (GDP) compared to the 10.5 percent that was projected in the initial budget.

Hassan said that the appreciation of the rupee has also helped to reduce the expenditures and revenue directly related to the foreign exchange.

"When we presented the budget for 2021, we had expected that on average a dollar would be 22.68. But we've seen that the economy has recovered faster than we anticipated and the rupee continues to appreciate. Our average projection for the year is 18.28," he added.

Another area that has done better than expected by 8 percent from January to June is tax collection. The projection for tax revenue has been revised by 7 percent from SCR 6.2 billion to SCR 6.6 billion.