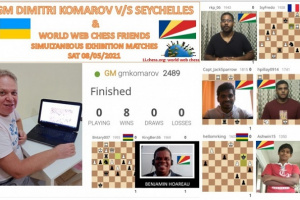 (Seychelles News Agency) - While COVID-19 has forced most sports in Seychelles to come to a standstill, the kings, queens and knights of the island nation are dancing across their virtual field of play.

The players of the Seychelles Chess Federation have been taking part in online competitions during the pandemic.

"We have had to adapt and find ways in order to keep our minds active," said the federation chairman, Benjamin Hoareau.

He said that despite challenges, virtual chess tournaments have been a great way to keep the players involved during the COVID-19 era.

Chess is a board game of strategic skill for two players, played on a chequered board on which each playing piece is moved according to precise rules. The object is to put the opponent's king under a direct attack from which escape is impossible.

Virtual chess is not a new concept as it has been present on most digital platforms for a long time for recreational plays, but in Seychelles, playing chess virtually on a competitive basis is a relatively new approach.

Hoareau said that the virtual competitions have been well received.

"It is great to see parents who meet me in the streets, saying thanks for organising these virtual competitions for their children. We have also been marketing it through posters at various shops and that has generated interest from kids," he added.

One of the latest national virtual chess tournaments was done on July 18 to celebrate the international chess day, a tournament won by Seychelles player Rajaganesan Ramachanran, ahead of Olaf Nazarenus from Switzerland.

The competition was done using one of the many available online chess servers, while Hoareau explained that they also have competed in international tournaments, using Zoom and via www.chess.com.

One of these international tournaments was the 2nd Online Chess Olympiad, which saw the participation of 60 countries. Seychelles finished in 11th place from their group which was comprised of 12 nations.

Hoareau said for Seychelles, an archipelago in the western Indian Ocean, it has not been an easy thing to do, especially with a lack of resources.

"We want to have more virtual competitions, but with limited resources, it is proving difficult, although I must thank those who have come forward to lend a helping hand in one way or another to keep our sport alive," said Horeau.

The chess federation will compete in further international tournaments throughout the year and Hoareau but that will depend on the resources they get.

"While we have found a way to keep going despite the challenges, it is still difficult to predict what the future holds, and therefore we can't really make any plans as to what we want to do in the near future and whether virtual chess is something we will stick with," he added.