Sea cucumber season set to open in Seychelles, with small reduction in quota 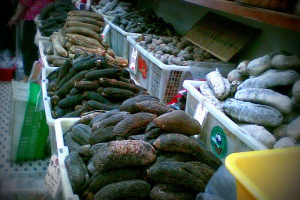 They got their name because of their resemblance to a cucumber and are consumed fresh or dried in various cuisines. (Bare Dremaer, Wikipedia) Photo License: CC BY 2.0

(Seychelles News Agency) - The 2020-2021 sea cucumber fishing season is set to open October 1, and the year's quota will be 10 percent lower for the flower teat fish species, one of the three types of sea cucumber targeted in Seychelles.

The Seychelles Fishing Authority (SFA) decided to reduce the quota as fishermen were not able to meet the previously set one which was 281,250 pieces of flower teat fish in total. The new quota is 253,125, SFA told boat owners and skippers earlier this week.

The principal fisheries scientist at SFA, Ameer Ebrahim, told SNA on Friday that the reason why fishermen were not able to attain the quota remains unclear.

"In order to determine the cause of this low quota intake for this species, a more comprehensive analysis on a vessel-by-vessel basis is required. According to feedback from one sea cucumber processor, vessels with Seychellois divers tend to target more flower teat fish, as they tend to operate in deeper waters, where this species is more abundant. On the other hand, vessels operating with Malagasy divers fish in more shallow areas where the other two species are more abundant," said Ebrahim.

Sea cucumbers are marine animals with leathery skin and an elongated body containing a single, branched gonad found on the seafloor worldwide. They got their name because of their resemblance to a cucumber and are consumed fresh or dried in various cuisines. Sea cucumbers are considered a delicacy in East and Southeast Asia.

The chief executive of SFA, Nichol Elizabeth, told the media this week that fishermen have fished enough the species that has the most quota allocation.

"Over four years, an average of 21 percent of the quota allocated to the flower teat fish has not been used. As such we proposed to reduce this quota by 15 percent and with lobbying of the fishermen, this was brought down to a reduction of 10 percent. The board has accepted this," Elizabeth said.

During the meeting, some sea cucumber fishermen outlined that one of the reasons the quota was not met was due to poor visibility underwater and bad weather, among other reasons.

As to other species of sea cucumber - prickly red fish and white teat fish - SFA outlined that for those fishermen more or less met their quota so it will stay the same for  the coming season at 37,500 and 56,250 pieces respectively.

For the season which starts on October 1 and closes on May 31, 2022, 25 licences have been allocated.

Ebrahim outlined that for this season two underperforming vessels will be removed and replaced by two new licensees.

When it comes to quota that fishermen have not met, SFA has outlined that they will redistribute the quota during mid-season for the three species. This will be done only once per season.

Another study on sea cucumber is to take place with the partnership of fishermen starting in November this year. SFA has recognised the need for a new fisheries independent stock assessment for the species as there is a need to following re-assess and adjust the current quota allocation. The fishing season will not be affected by this.