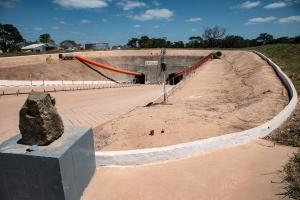 This April 26, 2018 general view shows the mining site of Kamoa Kakula, exploited by Kamoa Holding (Ivanhoe Mines, Zijin Mining Group, together with the DRC government), in Kamoa, 25km from Kolwezi. The mining site is one of the largest unexploited copper field in the world, and stands on the site of the battles for Kolwezi, in May 1978 during the second Shaba War where French and Belgian paratroopers fought agains the Katanga rebels. On May 19, 1978, French soldiers parachuted into the Democratic Republic of Congo town of Kolwezi to rescue hundreds of Europeans held by rebels who had already massacred several. (CAROLINE THIRION / AFP)

(AFP) - Local authorities in the Democratic Republic of Congo have closed half a dozen mining companies in South Kivu to ease tensions between locals and Chinese gold miners, a provincial source said on Saturday.

"Minerals are being exploited without respecting the mining code and regulations," said Christian Wanduma, a lawyer advising one of the most affected local communities.

The move comes after the central government this week said it is reviewing its stake in a giant cobalt and copper mine in which a Chinese state-owned group is the majority partner.

The African nation is seeking what it says is a fairer share of the nation's vast mineral wealth.

While the decision to suspend the mines was a "salutary" one, said Wanduma, there must also be other measures to ensure the community whose "mineral resources have been plundered" can "regain its rights".

Activities by mining companies have resulted in agricultural land being razed and depleted so that "even peanuts" cannot be grown there, he said.

It was "necessary to restore order to semi-industrial mining" to preserve "the interests of the local population, the environment and respect for human rights", the governor said in his decree issued on Friday, which was seen by AFP.

Doing so would also enable "the traceability of production" from sites, the decree said, naming six mining operations whose activities were suspended until further notice.

"All local and foreign personnel" of these companies must leave the mining sites immediately, the order said.

Mining equipment will be immobilised until an ad hoc commission has studied the situation "case by case", it said.

All the suspended companies are Chinese or work with the Chinese, who have a strong presences in the mining sector in the country.