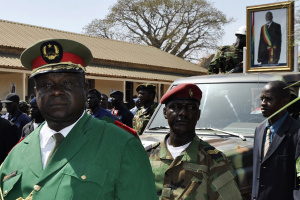 Guinea Bissau's army chief of staff, General Antonio Indjai (L), mourns as he walks in front of a vehicle adorned by a photo of late Guinea Bissau's president Malam Bacai Sanha during his state funeral in Bissau on January 15, 2012. Thousands of people, including two African heads of state, bid farewell today to Guinea Bissau president Malam Bacai Sanha at a state funeral in the capital Bissau. Sanha died in the French capital on January 9 at the age of 64 after a long illness and was buried later today accompanied by a 21-gun salute. (AFP PHOTO / MAMADU ALFA BALDE)

(AFP) - The United States on Thursday offered a $5 million reward for the arrest of Guinea-Bissau's former coup leader Antonio Indjai who is wanted for alleged drug trafficking on behalf of Colombia's FARC rebels.

Indjai, then army chief of staff, staged a coup in 2012 between rounds of presidential elections in the long unstable West African nation.

US prosecutors filed charges against Indjai in 2013, saying he had agreed to store tons of cocaine for the Revolutionary Armed Forces of Colombia, with the money used to buy weapons for the rebels and also to pay off officials in Guinea-Bissau.

"Indjai was seen as one of the most powerful destabilizing figures in Guinea-Bissau, operating freely throughout West Africa, using illegal proceeds to corrupt and destabilize other foreign governments and undermine the rule of law throughout the region," a State Department statement said.

It offered the $5 million reward for information leading to his arrest or conviction.

Indjai's coup was followed by a democratic transition and he was removed as army chief in 2014.