Amidst drought conditions, Seychelles turns off the overnight taps to conserve water 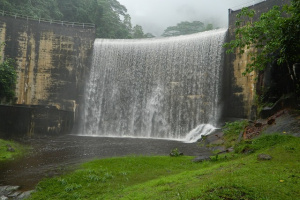 (Seychelles News Agency) - Areas of Seychelles on Tuesday saw restrictions imposed on the use of tap water, a response to drought conditions in the island nation, said an official of the Public Utilities Corporation (PUC).

The restrictions mean that residents in most areas on the main island of Mahe will not have running water from 10 pm to 4 am. PUC also urged consumers to use water wisely and avoid using treated water to wash vehicles or water their gardens.

The main water storage facility, Rochon Dam, which provides water to a large part of the country, is currently 66 percent full. The dam used to send water to the La Gogue dam which is not operational as work to increase its capacity by 600,000 cubic metres is expected to be completed mid next year.

While there are other rivers and catchments used to collect water for treatment, the utility company said those sources were also being depleted.

"The situation is now severe, and PUC is forced to impose water restrictions over Mahe. After consulting the (meteorological) office, we were informed that the drought may continue for around four months, and even when it does rain, it will be less than normal," said the general manager for water at PUC, Ibrahima Diallo.

He said that restriction measures need to be put in place now for PUC to cope with the situation.

Diallo added that although the drought has been ongoing for the last four months, "PUC was able to manage so far due to projects we have undertaken that have greatly helped."

Water scarcity in Seychelles, an archipelago in the western Indian Ocean, is more evident during the dry season from May to September when the southeast trade winds kick in.

To ensure that there is no water shortage during this period, PUC has undertaken several other projects to increase its water supply and storage, namely at Anse Major, Mare Aux Cochon in the north of Mahe the main island. There are also a projects at Caiman, Anse Boileau and one at L'Islette at Port Glaud, both in the west.

With the persisting drought, Diallo said that PUC has to switch to its desalination plants to meet the demand.

The desalination plants at Anse Boileau, in the northern district of Belombre and at the new manmade island of Perseverance in the northeast currently produce 58 percent of the water in use.