Reliant on others to eat, Seychelles refines food security plan ahead of UN summit 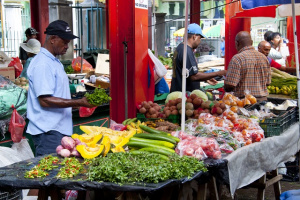 (Seychelles News Agency) - Seychelles, a country that imports 90 percent of what it eats, is refining its plans on food security in preparation for a report that will be presented at a UN 2021 food systems summit in New York in September.

The talks, which started on August 4, are aimed at getting input on food security, production and exportation from farmers, fishermen, food processors, importers, policymakers and the public.

The Minister for Agriculture, Environment and Climate Change, Flavien Joubert, told reporters that these sessions are important, especially considering what most of the world is going through at the moment.

What Seychelles wants, he said, "is to use these discussions to further our own national plans."

During a presentation in Tuesday's discussions, the consultant working on the report, Guy Morel, showed that at the moment Seychelles relies almost entirely on imported food products. Only 10 percent comes from local producers.

"Seychelles is still very much dependent on the importation of its food and while there are increases in meat and vegetable production, a lot more still needs to be done to ensure the country's food security, especially as the pandemic has shown us the importance of producing our own food," said the Minister.

Joubert participated in a virtual pre-summit meeting last month in which he explained the food system of Seychelles, an archipelago in the western Indian Ocean. He said that 20 percent is contributed by the fisheries sector which is the second top contributor to its economy after tourism, 2 percent by the agriculture sector and the importation of food commodities close to 90 percent.

The term "food system" refers to the constellation of activities involved in producing, processing, transporting and consuming food.

The UN food systems summit in September will launch bold new actions to deliver progress on all 17 Sustainable Development Goals (SDGs), each of which relies to some degree on healthier, more sustainable and equitable food systems.