Jepchirchir gives Kenya back to back women's marathon Olympic titles 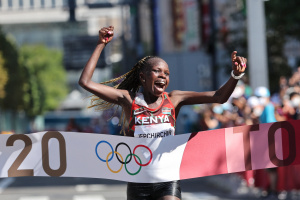 "It feels good. I'm so, so happy because we win as Kenya," said Jepchichir.

However, she tested positive for the endurance booster EPO in 2017, leading to an eight-year doping ban.

Organisers wary of the hot and humid conditions had announced on the eve of the race the start time had been brought forward an hour to 6am local time.

However, even with that, many runners failed to last the distance, including Kenya's world champion Ruth Chepngetich. Other runners crossed the finish line clearly in distress, including Mexico's Ursula Sanchez.

She staggered over the line and was attended to by a race official.

Two hours into the race the temperature had risen to 30.6°C (87 degrees Fahrenheit) with 63% humidity.

Jipchirchir agreed the conditions had been gruelling.

"I'm just thankful I managed (to cope) with that weather."

Jepchirchir and Kosgei had moved up a gear with four kilometres remaining with just a quartet of runners in contention for the medals.

Seidel was the first to be dropped followed by Kenya-born Israeli Lonah Salpeter.

The Israeli had looked set to give her adopted country their first ever athletics Olympics medal.

However, her hopes of a bronze were brought to a brutal end as she pulled up and retired soon after being dropped leaving Seidel clear in third spot.

Up ahead Jepchirchir made her decisive move for gold with two kilometres remaining and Kosgei could find no reserves in her tank.

"I pushed on the pace (and when I opened the gap) it was like, 'wow, I’m going to make it. I’m going to win',” said Jepchirchir.

It was the first defeat for Kosgei in five marathons -- she won Chicago (2018/19) and London (2019/20) -- but she had been struggling for a while in the hot conditions even resorting to stuffing an ice pack down the front of her running vest.

However, it was all smiles at the finish -- a mixture of joy and relief the endurance test was over -- as Kosgei embraced the new champion.

Seidel for her part said she had achieved her aim of stirring up a hornets nest.

"I try not to have too many expectations," said the 27-year-old.

"It is just to go out, stick your nose where it doesn't belong and try and make some people angry.

"My goal today was just to go in and for people to think, 'who the hell is this girl?'

"To get a medal for the US and to do it in the US uniform is huge." I