President of Seychelles urges African leaders to use ocean to curb hunger, poverty 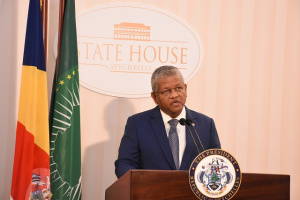 Ramkalawan said that Africa needs to use its natural resources for the betterment of the continent. (Seychelles Nation)

(Seychelles News Agency) - The President of Seychelles has urged African leaders to make good use of the ocean to help curb hunger and poverty on the continent in a virtual opening ceremony of the commemoration of the 2021 edition of the African Day of Seas and Oceans on Friday.

Ramkalawan said that Africa needs to use its natural resources for the betterment of the continent, where the development of Africa's blue resources remains central to efforts to ensure food security and social wellbeing.

"Unfortunately, too often the wealth produced by Africa's natural assets does not return to Africa but stays elsewhere. This exploitation has to be addressed. I call on all leaders of Africa to help stop the plunder and enrichment of third parties while our African brothers and sisters continue knocking doors with begging bowls," he added.

Ramkalawan called on western nations "to not only preach democracy and humanitarian principles but to practice them, as it is only in this manner that we will have fairness and work towards solving poverty issues while achieving Sustainable Development Goals."

Normally commemorated on July 25, the Africa Day of Seas and Oceans aims to raise awareness about challenges facing African Seas and Oceans as well as highlight the 2050 African Integrated Maritime Strategy and Africa's blue economy.

Ramkalawan added that Seychelles considers these bodies of water worthy of special status and recognises them to be among Africa's most prized natural assets and as such they need to be valued, protected and taken good care of.

Seychelles, an archipelago in the western Indian Ocean, is seen as a champion of the Blue Economy and has initiated a number of projects to support sustainable marine and fisheries.

In her address, Sacko said, "The huge opportunities around Africa's Blue Economy can change the narrative for the continent as an engine for socio-economic development and industrialisation. It can further create jobs and improve livelihoods for the teeming population in the continent and in particular the women and youth."

She said that despite these benefits and opportunities associated with the aquatic resources of Africa's vast oceans, seas and inland waters, the continent's Blue Economy potential is however under serious threat.

African oceans and seas were perceived to be part of the solution for the rising food insecurity and food shortages compounded by the pandemic said Sacko.

"Blue foods, namely foods derived from aquatic sources, have a key role to play in addressing protein deficits across the continent, and it is encouraging that many countries in Africa have well-established or emerging sectors on fisheries and seafood, aquaculture and seaweed/algae production," she said.

Also present at the ceremony was the Minister for Fisheries and Blue Economy, Jean-Francois Ferarri, who said that the blue economy is key to the sustainable development of Africa.

"The African Day of the Seas and Oceans, as an occasion for us to reflect on how the blue economy concept, can find clear, transparent and brave recommendations which will form the action plan in devising the solutions for Africa's challenges in the coming years," said Ferarri.

The commemorative day ended with a virtual panel discussion on the best practices of the blue economy, between representatives of a number of the African Union member states, including Seychelles, Cabo Verde, South Africa, and Egypt.