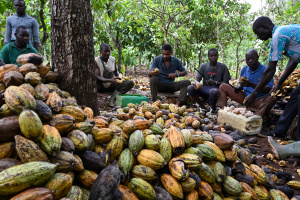 (AFP) - Ivory Coast and Ghana, the world's two largest cocoa suppliers, on Thursday agreed to better cooperate on pricing and combating child labour in the industry.

Ivory Coast accounts for more than 40 percent of world output, and Ghana at least 20 percent. More than half of their growers live below the poverty line.

The two West Africa producers joined forces in 2019 to try to get more from the chocolate industry, obtaining a premium per tonne of cocoa.

But the coronavirus pandemic has hit global demand, and buyers are reluctant to see prices rise with a surplus in supplies.

"The two countries which produce about 60 percent of the world’s cocoa have coordinated on some of those issues before, but this new organisation marks a formal step toward even more effective corporation," she said.

The world's chocolate market is estimated to be worth more than $100 billion, concentrated in a few multinational corporations.

Experts in Ivory Coast say that cocoa prices are still low, even with the so-called living income differential or LID supplement the two countries negotiated with chocolate makers to help farmers.

More than half of the million people working in the sector live below the poverty line, earning less than $1.2 per day according to the World Bank.

"The cost of even producing a bag of cocoa, is so much for us," Nana Kwabena PonKoh, a cocoa farmer said at the event.

"This kind initiative is going to help all farmers of both countries."