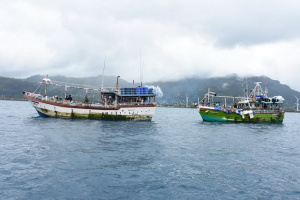 (Seychelles News Agency) - Seychelles is sending a clear message that it will not tolerate illegal activities in its waters after a heavy fine of SCR2.5 million -- or $167,000 -- was imposed on a Sri Lankan national, a top official said on Friday.

Mahalingam Kanapathi, the captain of a Sri Lankan-flagged vessel intercepted in the waters of Seychelles, was found guilty on August 4 of fishing without a foreign fishing vessel licence.

The 32-year-old was convicted for the offence under the Fisheries Act of Seychelles. Should he not pay the fine by August 14, he faces a two-year prison sentence.

The Legal Advisor at the Seychelles Fishing Authority, Yannick Roucou, told reporters that the fine is the minimum under the Act for such an offence.

"This is the first time since the coming into force of the Act in 2015 that such a fine has been imposed. This judgement is very important to us, as in previous cases when the court gave its ruling, the fine imposed was nowhere near the minimum fine stated under the law," said Roucou.

He gave the examples of two vessels intercepted for fishing illegally in the waters of Seychelles in 2019 that were fined SCR1,000 and SCR2,000.

"When the judge gave his ruling, he took into account that these people are considered as limited means - they do not have the ability to pay such fines," said Roucou.

"I think that the court this time around understood what message the authority wanted to convey. Chief Justice Govinden outlined that such an action needs to be discouraged and by imposing such a fine, we are sending out a message to the international community that Seychelles will not take such acts lightly," he added.

SFA's monitoring, control and surveillance manager, Johnny Louys, said that aside from acting as a deterrent for others, should the fine be paid, it will allow the country to recover the money lost through the coordinating of such operations and related expenses.

"Seychelles is getting something in return and this is important now more than ever as our economy is in a dire state," said Louys.

Since 2015 there have been around 23 such illegal fishing cases that occurred in Seychelles, an archipelago in the western Indian Ocean. Around 80 percent were Sri Lankan vessels and Roucou said that such cases are increasing and occurring more frequently.

He explained that stealing the resources of the Seychelles is not fair for local fishermen who need to go fishing further out at sea for longer periods.

"SFA and other authorities are ensuring that our marine resources are exploited in a sustainable manner. When such people commit such illegal acts in our waters, this defeats the efforts that all the authorities are making. At the same time, this affects the lives of all Seychellois as these resources are for the people of Seychelles," said Roucou.