No plan to house India military base, Mauritius says 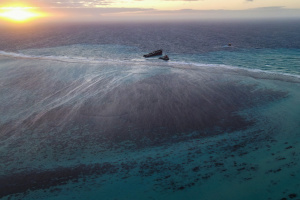 An aerial view taken in Mauritius on August 17, 2020, shows the MV Wakashio bulk carrier, belonging to a Japanese company but Panamanian-flagged, that had run aground and broke into two parts near Blue Bay Marine Park.
AFP

(AFP) - Mauritius has denied a report that it has allowed India to build a military base on the remote island of Agalega, with a government official telling AFP that no such agreement exists between the two nations.

Earlier this week, news broadcaster Al Jazeera reported on the construction of an airstrip and two jetties to house an Indian military base on Agalega, located about 1,000 kilometres (600 miles) north of the archipelago's main island.

But on Wednesday, the Mauritian government denied any plans to allow a military installation on Agalega, home to about 300 people.

"There is no agreement between Mauritius and India for the creation of a military base in Agalega," Ken Arian, a communications adviser to Prime Minister Pravind Jugnauth, told AFP.

Arian said that although work was under way on two projects agreed during Indian Prime Minister Narendra Modi's 2015 visit to Mauritius -- a three-kilometre (1.8-mile) air strip and a jetty -- they would not be used for military purposes.

The report raised fears of a repeat of the 1965 decision by Britain to separate the Chagos Islands from Mauritius and set up a joint military base with the United States on Diego Garcia, the largest of the isles.

The decades-old move has sparked protests by Chagossians, who accuse Britain of carrying out an "illegal occupation" and barring them from their homeland.

Britain insists the islands belong to London and has renewed a lease agreement with the United States to use Diego Garcia until 2036.

Diego Garcia played a strategic role during the Cold War, and then as an airbase, including during the war in Afghanistan.