Conflict 'behind us', Ivory Coast's Ouattara says after greeting rival 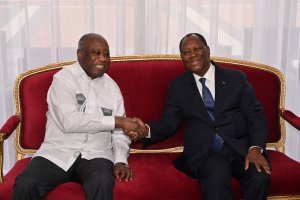 Ivory Coast President Alassane Ouattara (R) shakes hands with his predecessor and former rival Laurent Gbagbo (L) at the presidential palace in Abidjan, on July 27, 2021 during their first talks since Gbagbo returned last month from Europe after a nearly 10-year absence. The long-awaited talks are widely seen as a key to ending Ivory Coast's political crisis, as the two headed rival factions in a post-election conflict in 2010-11 that claimed several thousand lives. The post-electoral conflict claimed more than 3,000 lives. After he was ousted, Gbagbo was flown to The Hague to face charges of crimes against humanity before the International Criminal Court (ICC), of which he was eventually acquitted. (Issouf SANOGO / AFP)

(AFP) - Ivory Coast President Alassane Ouattara offered a hearty welcome to his predecessor Laurent Gbagbo on Tuesday as the rivals met for the first time since the West African country's deadly 2010-11 conflict, saying the turmoil was "behind us".

"How are you, Laurent? Happy to see you," Ouattara said as Gbagbo arrived at the presidential palace in the Ivorian economic capital Abidjan.

At a joint news conference after their meeting, Ouattara said: "This crisis created differences, but that is behind us. What is important for Ivory Coast is peace in our country."

Gbagbo, for his part, called for the release of prisoners held since the crisis, which was sparked by his refusal to accept defeat at the ballot box to Ouattara.

Gbagbo, 76, has leapt into the spotlight since returning last month from Europe, after having been acquitted for crimes against humanity in a landmark case heard at the International Criminal Court.

After he was ousted, Gbagbo was flown to The Hague to face charges of crimes against humanity, of which he was eventually acquitted.

Tuesday's meeting was closely watched for signs of whether the two former rivals have buried the hatchet, boosting hopes for national rapprochement after deadly clashes last year.

"The mere fact of seeing Ouattara and Gbagbo together is being seen as a sign of healing and a strong image for Ivorians in their quest for peace and national reconciliation," the opposition newspaper Notre Voie (Our Way) said.

But Gbagbo's spokesman Justin Katinan Kone urged the public "not to make too much" of the meeting.

"This is a courtesy visit to his elder... If it helps to ease the political atmosphere, so much the better," he said.

A onetime international banker, Ouattara, 79, won a landslide victory in the last elections on October 31. But the credibility of the win was undermined by an opposition boycott.

In the run-up to the vote, scores of people died in clashes with police after Ouattara unveiled his controversial bid for a third term.

In this context, Ouattara has officially welcomed Gbagbo's return, hoping it will ease tensions.

But the question is whether Gbagbo will stick to the script of statesman or prefer an active political role that may challenge Ouattara.

Gbagbo rose in the 1970s as a left-wing campaigner who helped end Ivory Coast's one-party system following independence from France in 1960.

His years in power were marked by rebellion, civil war, national divisions and repeatedly postponed elections, but he retains considerable grassroots support.

His defenders portray him as a champion of the poor and oppressed.

Commentators are also watching the interplay among Ouattara, Gbagbo and former president Henri Konan Bedie, 87, three men who have dominated the political stage for decades.

Bedie teamed up with Ouattara in the 2010 elections, but in 2018 his Democratic Party of the Ivory Coast (PDCI) joined the opposition.

In March, it forged an electoral alliance with Gbagbo's Ivorian Popular Front party, and on July 11, Gbagbo and Bedie announced they were united in the goal of forging "final and sustainable peace".

"The PDCI welcomes the new disposition of the president towards dialogue," one of the party's directors, N'Goran Djedri, told AFP after the press conference, adding that Ouattara was following in Bedie and Gbagbo's footsteps by embracing "this spirit of inclusive dialogue".

"We believe that Ivorians can feel the ground shifting in favour of peace and reconciliation, and that benefits everyone."

One lingering matter is a 20-year jail sentence for Gbagbo, who was convicted in absentia of "looting" the Central Bank of West African States (BCEAO) during the 2010-11 conflict.

Authorities have hinted that this sentence will be lifted.

Issiaka Diaby, who heads an association called the Collective of Ivory Coast Victims, lashed out at "selective" decisions by the judicial system.

"We believe that reconciliation cannot be boiled down to a meeting between two citizens," he said on Tuesday at ceremonies in an Abidjan graveyard to honour fatalities in the 2010-11 crisis.