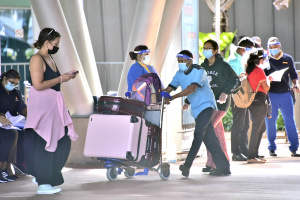 Tourists arrive at the Sir Seewoosagur Ramgoolam International Airport in Port Louis on July 15, 2021 as Mauritius has opened its borders to international travellers, both vaccinated and non-vaccinated with phase 1 of the reopening of the exotic Indian Ocean island running until September 30, 2021. (AFP)

(AFP) - The Indian Ocean island nation of Mauritius has seen a dramatic surge in Covid-19 infections over the past week, but almost all are symptom-free, officials said Monday.

Mauritius recorded 1,067 new cases last week -- about a third of the 3,528 declared since the new coronavirus was first detected there in March 2020, according to official figures.

"Cases are increasingly asymptomatic, which has led to a relaxation of controls. As many as 99 percent of cases are asymptomatic," said Zouberr Joomaye, spokesman for the National Communication Committee (NCC), the body in charge of monitoring the pandemic.

"Everything is under control, the many quarantine centres are by no means overcrowded and there are no deaths or people seriously affected."

Joomaye said most infections had occurred in schools, businesses or dormitories for foreign workers.

And the authorities have ruled out a link between the increased caseload and the limited opening of borders to international travel this month.

After long months of isolation from the outside world, Mauritius began welcoming international tourists again on July 15.

But only vaccinated holidaymakers with a negative PCR test are allowed in, and they have to be confined to "bubbles" in their hotels or resorts for a 14-day quarantine before being allowed further afield.

Mauritius, a nation of 1.3 million people, began its anti-Covid vaccination drive at the end of January with the goal of immunising 60 percent of the population by the end of the year.

Joomaye said 40 percent of Mauritians had received two doses, and 50 percent one shot.

While the pandemic has largely spared Mauritius, its tourism-dependent economy has been hit hard. It plans to open fully to foreign travel from October 1.