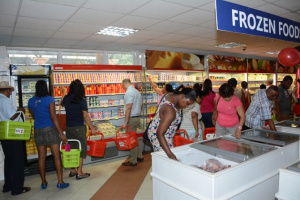 STC has between four to six months of stock for dry goods and two to three weeks' worth of perishable goods. (Seychelles Nation)

(Seychelles News Agency) - The Seychelles Trading Company (STC) says delivery delays for its consignment of goods will not affect the price of commodities for the public.

The delayed consignment includes items such as rice, oil, butter and toilet paper.

In a press conference on Thursday, the acting chief executive, David Jean-Baptiste, said, "STC has a buffer stock of these goods already in the country though, and therefore the delay will not cause any shortages of these items on our shelves."

STC has between four to six months of stock for dry goods and two to three weeks' worth of perishable goods.

Jean-Baptiste said that the delay was due to numerous issues, including the recent congestion in the Suez Canal and container shortages.

"We currently have two ships that have been delayed with one bringing perishables expected to arrive in a week. The other – which contains dry goods - has been delayed for over a month and will arrive in Seychelles on August 10," he added.

Jean-Baptiste said the public will not feel any effects from these delays and that there will not be any rise in prices on the essentail commodities.

In a bid to lower the cost of goods in Seychelles after an increase caused by the COVID-19 pandemic on the exchange rate, STC this year started reviewing its business model.

The importer has gone back to its priority of being a wholesale distributor, concentrating its efforts on sourcing essential as well as semi-essential products at affordable prices for distribution to local retailers.

"There is a lot of work going in the background in which we are negotiating various details. We are pleased to announce that most have been successful and we will see STC spending a lot less than before, which is good for everyone as we look to reduce the cost of living in Seychelles," he added.

These negotiations include a reduction in unloading fees at the port and also getting more storage facilities with the help of the Financial Services Authority (FSA).

STC has also announced that it has begun negotiations with local farmers for the purchase of tomatoes that are grown locally so that STC can stop importing tomatoes, which they say will also reduce their spending as the farmers have agreed to sell them local produce at lower prices.