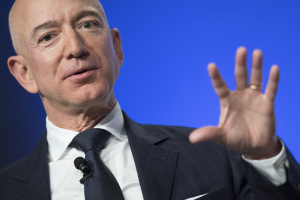 (FILES) In this file photo taken on September 19, 2018 Amazon and Blue Origin founder Jeff Bezos provides the keynote address at the Air Force Association's Annual Air, Space & Cyber Conference in Oxen Hill, MD. Jeff Bezos sets his sights on a new frontier in space in the coming days after building a gargantuan business empire which has in many ways conquered the Earth. (Jim WATSON / AFP)

(AFP) - Earth's wealthiest man Jeff Bezos spent a few minutes outside the planet's atmosphere Tuesday on Blue Origin's first crewed space mission -- a breakthrough moment for the space tourism sector that after years of delays is now poised for liftoff.

The flawless 10-minute hop from a west Texas base to beyond the Karman line -- the internationally recognized boundary marking the start of space -- and back again to the surface for a gentle desert landing minted four new astronauts, including the oldest and youngest ever.

Bezos said afterwards that like those who had gone before him, he was "amazed and awestruck by the Earth and its beauty, but also its fragility."

"It's one thing to recognize that intellectually -- it's another thing to actually see with your own eyes," he added.

Virgin Galactic founder Richard Branson crossed the final frontier on July 11, narrowly beating the Amazon magnate in their space battle of the billionaires.

Blue Origin's sights, however, are set higher: both in the altitude to which its reusable New Shepard craft ascends compared to Virgin's spaceplane, and in its longer-term ambitions.

Bezos, 57, founded Blue Origin in 2000 with the goal of one day building floating space colonies with artificial gravity where millions of people will work and live.

The New Shepard suborbital rocket -- named after Alan Shepard, the first American in space -- had flown 15 uncrewed flights to put it through its paces and test safety mechanisms before Tuesday's mission.

Today, the company is developing a heavy-lift orbital rocket called New Glenn -- named for John Glenn, the first American to orbit the Earth -- and also a Moon lander it is hoping to contract to the US space agency NASA.

Liftoff, which was slightly delayed, came at 8:12 am central time (1312 GMT) from Blue Origin base Launch Site One, some 25 miles (40 kilometers) north of the nearest town, Van Horn.

Funk and Daemen became the oldest and youngest astronauts, respectively.

A spot opened up for Daemen after the anonymous winner of a $28 million auction postponed their flight, citing "scheduling conflicts."

Daemen's financier father was a runner-up in the bidding, making his son the first paying customer.

The capsule separated from its booster, and when it got high enough, the astronauts unbuckled and experienced near zero gravity for three to four minutes.

Footage showed them performing somersaults and throwing Skittles which Dutch teen Oliver Daemen caught in his mouth, as the capsule ascended to a peak altitude of 66.5 miles (107 kilometers).

"We had a great time, it was wonderful," Funk, who trained as an astronaut but was denied the opportunity to go to space by the sexism of the early space era, later told reporters.

The booster returned autonomously to a landing pad just north of its launch site, while the capsule fell back to Earth with three giant parachutes, and finally a thruster, for a soft landing that sent up a cloud of dust.

The crew took a number of mementos with them for the trip, including a piece of fabric from the Wright brothers' first plane, a bronze medallion made from the first hot air balloon flight in 1783, and a pair of goggles that belonged to Amelia Earhart.

After the flight, crewmembers hugged their family and friends, while congratulations came from Branson and NASA.

"We look forward to future flights with researchers and NASA-supported technology payloads aboard," NASA said on Twitter.

But some Democratic lawmakers criticized the optics of the jaunt, as well as the low tax rate paid by Bezos, who is worth more than $200 billion.

"The COVID-19 pandemic has brought pain, suffering and death to everyday Americans. And we're supposed to care that billionaires are traveling to the edge of space?" tweeted Congressman Hakeem Jeffries.

Bezos has acknowledged the criticism and announced at the press conference he was giving away two $100 million prizes as "courage and civility awards" to activist and TV presenter Van Jones, and chef and humanitarian Jose Andres.

As for what comes next, Blue Origin has promised two more flights this year, with Bezos revealing: "We're approaching $100 million in private sales already, and the demand is very, very high."

He acknowledged that while the cost would remain prohibitive for most people, "you've got to do it the same way we did it with commercial airline travel," and predicted that prices would fall.

For Harvard astronomer and space industry analyst Jonathan McDowell, "suborbital space tourism, after such a long wait, is finally here."

"We're going to see vastly larger numbers of people go into space: in some senses, a more diverse population -- not diverse in wealth but I think we'll see rich people from around the world," he told AFP.