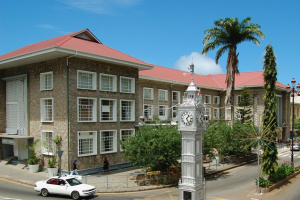 Liberty House which houses the Ministry of Finance. (Gerard Larose)

The announcement was made Wednesday in a press conference in which high level officials from the government gave details on economic reforms that Seychelles will implement that are subject to IMF management approval of the agreement.

The Minister for Finance, Naadir Hassan, said that Seychelles' economic situation is in a bad state and that reform is needed to ensure the long term future of the country.

"The discussion between the Seychelles' government and IMF has been a long and complicated one, given the country's financial situation and the repercussions of the COVID-19 pandemic and the global economy," he said.

"The government needs to better manage its expenditures, which means that the reforms are needed to ensure that the government become more disciplined with its finances, which in other words, means that we will have to do more with less," added the Minister.

Some of the measures to be taken under the economic reform include improving Seychelles' debt sustainability, the business environment and reform of public administration.

He said that there is also the need for reskilling programmes to ensure that the public sector performs at maximum efficiency.

On her side, the mission chief for the IMF in Seychelles, Boriana Yontcheva, highlighted the positive impact that the reopening of Seychelles to tourism has had on the island nation's economic outlook.

"As Seychelles led the world in its vaccination effort and reopened its borders on March 25, tourists have returned and economic activity has begun to revive," she said.

Yontcheva added that the "GDP is expected to grow by 7.7 percent in 2021. The current account deficit is expected to narrow to 22 percent GDP in 2021 as tourist receipts resume."

These comments also reflect the latest Fitch Ratings, released in May 2021, where Seychelles was given a grade 'B' with a stable outlook.

Several reforms at the Central Bank of Seychelles (CBS) will be part of the programme.  This includes the modernisation of the financial system and enhancing the regulatory and supervisory framework, strengthening the legal basis of the Financial Stability Committee and enhancing the adoption of innovative financial services, in line with the government's digital economy agenda.

"The works that the Central Bank has to do was already in place, but we now have to implement them sooner," said Caroline Abel, the Governor.

"Now we have to ensure that our monetary policy framework is effective and that the foreign exchange market functions well and should the CBS need to intervene, we need to have the tools necessary to do so without affecting the price," she added.

The last time Seychelles, an archipelago in the western Indian Ocean, embarked on economic reform was in 2008. The macroeconomic reform programme with the assistance of IMF was to primarily address the serious balance of payments and external debt difficulties.