U.K. bolsters Anti-Corruption Commission of Seychelles, which will get its own prosecutor 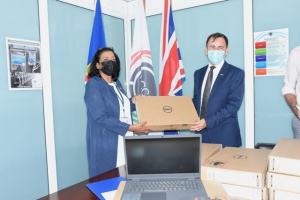 In the first donation, 12 new laptops and workstations were handed over by the British High Commissioner, Patrick Lynch, to the chief executive of the Commission, May de Silva. (Seychelles Nation)

(Seychelles News Agency) - The Anti-Corruption Commission of Seychelles will soon benefit from having its own prosecutor which will allow it to prosecute cases of corruption rather than having to go through the Attorney General.

The development comes from support from the United Kingdom, which will include assistance to help the Commission tackle corruption.

In the first donation, 12 new laptops and workstations were handed over by the British High Commissioner, Patrick Lynch, to the chief executive of the Commission, May de Silva, at ACCS' new offices in Providence on Friday.

The initial donation will assist ACCS in meeting the day-to-day needs of its team, following the government of Seychelles' commitment to increase the number of investigators.

"In the UK, Seychelles and across the world, communities recognise that corruption is not a victimless crime. Every rupee that is lost to corruption is lost to schools, hospitals and all of the other parts of the public sector that impact the life chances of the people of these islands," said Lynch.

He added that in order to stop corruption, it must first be exposed and then followed by effective transparent judicial processes to ensure that those who are guilty face appropriate consequences.

On her side, Da Silva said that "this support comes at an opportune time for the ACCS. We continue to work on other cases and hope to see more cases delivered to the Attorney General's office or if we have our prosecutor in place by the end of the year, we will be taking the cases ourselves."

She said that the Commission has submitted four cases to date and the most talked about case being taken up is the $50 million dollars that went missing 18 years ago.

A $50 million grant to Seychelles from the United Arab Emirates in 2002 to purchase food for the country by the then Seychelles Marketing Board (SMB) received through the Central Bank of Seychelles went missing. Former President Danny Faure in 2017 called on the Anti-Corruption Commission to coordinate their efforts to undertake an investigation to determine the facts concerning the missing $50 million grant.

The UK support package will also include the deployment of international technical experts to support a surge of activity in the investigation and prosecution of corruption cases as part of the restructuring of the Commission.

The restructuring of the ACCS was announced by the President of Seychelles, Wavel Ramkalawan, during his first State of the Nation Address, in January.

"We expect results. We will expect that corruption is adequately investigated and results brought forward. The law is above us all and when I say this, I mean all who are engaged in corrupt acts should watch out. This year, I want to see results, and if by the end of 2021 there are no results, during next year's SONA I will announce that the Commission is closing," he said.

The increased capacity at ACCS, coupled with additional technical expertise, has the potential to provide a significant deterrent to corruption, which will lead to a considerable boost to the economy of Seychelles, an archipelago in the western Indian Ocean.

The ACCS was established under the Anti-Corruption Act 2016 which gives it authority to investigate, detect and prevent corrupt practices. It is a self-governing, neutral and independent body that is not subject to the direction or control of any person or authority.