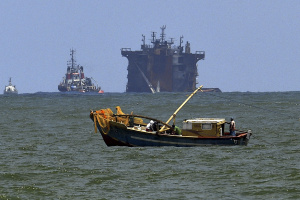 A Sri Lankan fishing boat operates in the backdrop of the site where the Singapore-registered container ship MV X-Press Pearl, which is sinking after burning for almost three weeks in the sea off Colombo Harbour, in Colombo on June 18, 2021. (ISHARA S. KODIKARA / AFP)

(AFP) - A container ship left adrift in the Indian Ocean after an engine room fire was being towed to Singapore on Saturday, Sri Lanka's navy said.

The Indian coastguard helped extinguish the blaze after it erupted aboard the MV MSC Messina on Friday about 425 nautical miles (787 kilometres) from Port Blair in India's Andaman and Nicobar Islands.

"We were informed that the fire was completely doused by this afternoon and the ship is being towed to Singapore," Sri Lanka navy spokesman Indika de Silva told AFP.

One of the 28 crew members remains missing after the fire.

Sri Lanka's navy helped coordinate communications with the stricken ship and other vessels in the area.

The Liberian-registered MSC Messina left a Colombo port on Wednesday en route to Singapore and reported the fire halfway to the Malacca Strait.

It is the second ship to catch fire in the Indian Ocean in recent weeks, with the Singapore-registered MV X-Press Pearl going up in flames and sinking off Colombo earlier this month.

The MV X-Press Pearl was carrying large quantities of chemicals and plastics and the accident has caused extensive damage to Sri Lanka's marine ecosystem.