Some in Madagascar 'on verge of starvation': UN 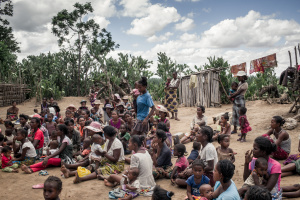 Residents of Ifotaka municipality participate in a programme to screen for malnutrition and distribute food supplements for infants, organised by the NGO Action Contre la Faim and the World Food Programme (WFP) in southrn Madagascar, on December 14, 2018. In the village of Ifotaka, at the southern tip of Madagascar, the noise and excitement of the country's election campaign seems far away as locals confront more pressing needs in a daily struggle for food. For several seasons now, the entire southern part of Madagascar has been caught up in a drought that has made water increasingly scarce, wrecking even efforts to grow rice -- the staple food. (RIJASOLO / AFP)

(AFP) - The famine ravaging Madagascar -- the first country to experience such conditions due to climate change -- is forcing people to eat locusts, cactus fruits, leaves and even mud, and some are on the verge of starvation, a UN official warned Friday.

The current situation -- brought on by years of persistent drought -- prompted World Food Programme executive director David Beasley, who recently visited the country, to say it was akin to "something you see in a horror movie."

The WFP's regional director for southern Africa, Lola Castro -- who accompanied Beasley to Madagascar -- called the crisis "very dramatic" in a video interview with journalists at UN headquarters in New York, warning: "The worst is about to come."

"We have people on the verge of starvation and there is no conflict. There's just climate change at its worst affecting them badly," Castro said, adding that "rapid action" from the international community is "very necessary."

"These people have contributed nothing to climate change and they take the whole burden of climate change," she said, quoting Beasley.

The WFP says Madagascar, off the southeast coast of Africa, is the "first country in the world that is experiencing famine-like conditions as a result of the climate crisis."

The situation is most dire in southern Madagascar. More than a month ago, the United Nations warned that more than a million people in the south were facing "acute food insecurity."

Most of southern Madagascar's population relies on agriculture, livestock and fishing. Food production has been dramatically low since 2019.

It is difficult to get aid to the island nation, and journalists have been unable to access the areas worst affected due to coronavirus-related restrictions in place.

Aid agencies have also struggled to attract public attention to the crisis, and aid funds are lacking.