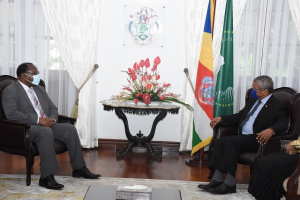 Nyamadzabo, an executive director for Africa at the World Bank, met with Seychelles' President Ramkalawan on Tuesday to discuss the avenues available to the country. (Seychelles Nation)

(Seychelles News Agency) - Seychelles could receive a needed injection of funds from the World Bank earlier than originally planned to help the island nation recover and advance after the damage done to the economy due to COVID-19.

As part of those negotiations, Taufila Nyamadzabo, an executive director for Africa at the World Bank, met with Seychelles' President Wavel Ramkalawan on Tuesday to discuss the avenues available to the country.

Seychelles has already started talks with the International Monetary Fund (IMF) to determine the type of loan it would receive from the World Bank. Both parties have agreed on those will give Seychelles the flexibility to use the funds where they are needed the most.

The island state in the western Indian Ocean has found the need to urgently diversify its economy after the tourism sector was severely affected by the downturn in visitor arrivals due to the COVID-19 pandemic.

Nyamadzabo said that "the diversification would allow for the development of other sectors in the economy, which in turn will lessen the blow should Seychelles be faced with similar situations in the future."

Areas currently being considered as viable options for economic diversification include the digital fields, further processing in agriculture and value added products in the fisheries sector.

The original time frame for Seychelles to receive funding from the World Bank would have been in September or October, but after talks, it has been decided that the country will require the resources much earlier.

The sum Seychelles will receive from those financial institutions will depend on the results of negotiations currently taking place with the IMF. At the moment the macro-economic variables, as well as other details, are being ironed out in order for the World Bank to proceed with disbursing the funds.

Since Seychelles is considered to be a high-income country, negotiations to acquire financial assistance from the financial institutions tend to be harder than it is for lower income countries.

Nyamadzabo explained that for Seychelles and other island states' economies that depend on very little sectors, the board will take those facts into consideration when analysing its case.

"There is a need to support such countries because that high income is based on the fact that the economy grew very quickly in the past. And given the very small population, when you divide the GDP by the population the per capita tends to be above $70,000," he said.

He said that given the global reach of the World Bank and the experience it has working with other countries, it will be able to assist Seychelles with advice that will allow it to move forward in the future.

Seychelles currently has a $50 million for the Blue Bond with the World Bank which is allowing the development of the country's Blue economy through value added products among others.