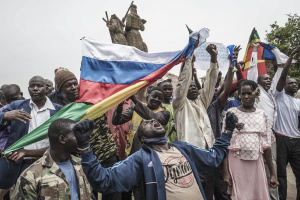 Russians and Malian flags are waved by protesters in Bamako, during a demonstration against French influence in the country on May 27, 2021. The Malian soldiers released the Malian president and the transitional Prime Minister, while taking back the controls in their hands, far from the international demand for a rapid return of civilians to the head of the country. (Michele Cattani / AFP)

(AFP) - West African leaders will meet on Sunday to frame a response to the crisis in Mali, where the military have reasserted control just nine months after a coup, diplomats told AFP Friday.

The extraordinary summit in Ghana will gather heads of the Economic Community of West African States (ECOWAS), which has led efforts to defuse the crisis, they said.

The bloc has warned of reimposing sanctions against fellow member Mali after the military earlier this week detained the leaders of an interim government tasked with steering the return to civilian rule following a coup last August.

The transitional president, Bah Ndaw, and Prime Minister Moctar Ouane stepped down after they were held and have since been released.

Military strongman Assimi Goita, who had been named vice president, told mediators who flew to Bamako this week that he intends to head the transitional government himself and name a prime minister, diplomats say.

The 15-nation ECOWAS has been assertive in several of the recent crises in West Africa.

It imposed sanctions against Mali after young officers forced out the country's elected president, Ibrahim Boubacar Keita, following mass protests against him.

The bloc suspended Mali from its decision-making bodies, closed its borders and stopped financial and trade exchanges except for essential products such as fuel and electricity.

The measures were lifted after the interim government was formed with a civilian president and prime minister, and the military promised to restore full civilian rule within 18 months.

One of the poorest countries in the world, Mali is battling a jihadist insurgency that began in the north 2012, later spread to the volatile centre and then into neighbouring Niger and Burkina Faso.

Thousands of people have died, and hundreds of thousands have fled their homes.