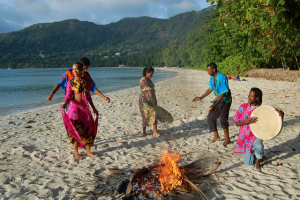 The rhythm for the dance is from a drum made with dried goatskin, which needs to be heated through an open fire before the drumming starts. (Gerard Larose, Seychelles Tourism Board)

(Seychelles News Agency) - Seychelles' moutya dance is now in the final stage of being considered as a world cultural heritage by the United Nations Educational, Scientific and Cultural Organisation (UNESCO).

In a recent interview with SNA, a top official from the Culture Department said the island nation's dossier has made the list for final recommendation.

"UNESCO has informed us that technically the file is in order and has been put on a list to be considered as a world heritage. The list will be considered later in December, given the fact that the dance made the list is a positive sign and gives a lot of hope," said Julianne Barra the director general for Culture.

It was in 2018 that Seychelles, after trying and not succeeding twice before, for the third time submitted a dossier to get the dance recognised. The application to UNESCO was accepted. In 2019, the dossier was sent to the committee level where the application was thoroughly analysed and evaluated to see if 'moutya' can be considered as a heritage.

Moutya is a traditional dance similar to the sega. The rhythm for the dance is from a drum made with dried goatskin, which needs to be heated through an open fire before the drumming starts. The songs which accompany the dance are those that recount the hardship of everyday life. It is believed that the African slaves started the moutya.

In a past interview with SNA, Principal Secretary for Culture Cecile Kalebi explained that it is important for the Seychelles – 115 islands in the western Indian Ocean - to have a cultural heritage as currently there are two environmental World Heritage sites.

These are Vallee de Mai, a nature reserve on Praslin, the second-most populated island, where the endemic coco de mer grows in its natural state. The second site is the Aldabra Atoll - one of the largest atolls in the world, home to the largest giant tortoise population in the world – the endemic Aldabra tortoises.

"Cultural heritages link us to our history and also place our country on the world map. Already our two national heritage sites give Seychelles a good name out there. Many people who follow these applications want to see it happen in the original country. It is also our aim to keep these things alive in order to attract tourists but also to make us proud as a nation," said Kalebi.

A hopeful and excited Barra told SNA: "If the moutya is considered it will be an exceptional honour. It will be the first time one of our traditional music, dance is protected. For now, we are protecting it nationally, but now it will be protected internationally, it will get its protection. And another thing is that Seychelles will get recognition everywhere. We can also get financial assistance to do other projects affiliated with moutya and us in Seychelles. We must continuously have national programmes to promote the moutya."