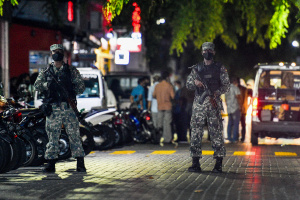 Soldiers secure a site after a bomb blast injured former Maldives president and current parliament speaker Mohamed Nasheed in Male on May 6, 2021. (AFP)

(AFP) - Maldives police said Saturday that "religious extremists" staged the attempt to assassinate former president Mohamed Nasheed, who has been taken off life support in hospital.

They said two men had been arrested for the bomb attack on the 53-year-old democracy pioneer and climate activist in the capital, Male, on Thursday night.

Nasheed underwent 16 hours of surgery to remove shrapnel from his body and doctors said one shard narrowly missed his heart.

The attack also injured a British national and two others.

He said the owner of a motorcycle that the bomb was rigged to and another man had been arrested.

Police issued a photo of a third person seen in the area just before the blast and sought help to trace him.

There has been no claim of responsibility for the attack, but officials from Nasheed's Maldivian Democratic Party (MDP) have alleged that religious extremists and political interests could be involved.

The Indian Ocean archipelago of 330,000 people is Muslim majority and in October 2019 police arrested a suspected Islamic State recruiter accused of sending dozens of Maldivians to Syria.

The same man was accused of setting off a homemade bomb that wounded 12 Chinese tourists in Male in September 2007.

Commissioner Hameed said two members of the Australian Federal Police joined the investigation Saturday and they expected a senior British officer to join them.

Two experts from the UN Office on Drugs and Crime were also expected to help.

The hospital where Nasheed is being treated said he was taken off life support systems on Saturday after major surgery but was still in intensive care.

The 53-year-old spoke with his parents and told them he was "much better", his sister Nashida Sattar said on Twitter.

"The doctors are very happy with the recovery progress," added his brother Ibrahim Nasheed.

"I managed to exchange a few words. He promised to come back stronger and I believe him."

Doctors said the improvised device used in the attack had been packed with ball bearings to cause maximum damage.

Some of the shrapnel damaged Nasheed's lungs and liver, the hospital said.

President Ibrahim Mohamed Solih thanked Nasheed's medical team and said he prayed for his "quick recovery and return -- stronger and steadier than ever".

Nasheed ended decades of one-party rule in the Maldives and became its first democratically-elected president in 2008. He was toppled in a military backed coup in 2012.

He is known internationally as a champion for battling climate change and rising sea levels that he says threaten to submerge the nation of 1,192 coral islands.

Nasheed was barred from contesting a 2018 presidential election because of a terrorism conviction after he was forced out of office.

The UN Working Group on Arbitrary Detention has declared the conviction politically motivated.

He returned from exile in Britain, however, and his party won legislative elections in 2019 and he is now parliament speaker.