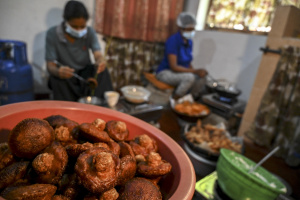 Women cook traditional Kevum oil cakes at Kadawatha, a suburb area of Colombo on April 8, 2021 ahead of the Sinhala Tamil New Year celebrations which will be held on April 13 and 14. (ISHARA S. KODIKARA / AFP)

(AFP) - Sri Lanka announced Friday that its economy shrank 3.6 percent last year due to the Covid-19 pandemic, making it the worst downturn since independence from Britain in 1948.

The unprecedented recession compared with a 2.3 percent GDP growth in 2019, the Central Bank of Sri Lanka said in its annual report for 2020.

It hoped the economy would rebound in 2021 and record an optimistic six percent growth on the back of improved local manufacturing and services.

"The pandemic has also offered an opportunity to reset the economy's focus and to address longstanding structural weaknesses and establish a production-based, productivity-driven economy," the bank said.

The pandemic hit the island's lucrative tourism sector while sharp contractions were seen in construction, manufacturing as well as in services, the bank said.

It said the central government's debt also rose to 101 percent of GDP last year, up from 86.8 percent of GDP in the previous year, underscoring the debt crisis faced by the South Asian nation.

International rating agencies have expressed fears for Sri Lanka's ability to service its huge foreign debt as the country's foreign reserves fell sharply in the past year.

The island's economy was trying to recover from the effects of the 2019 Easter Sunday bombings that killed 279 people when the pandemic hit in early 2020.

Two weeks ago, Sri Lanka secured a $500 million loan from China to shore up its foreign exchange reserves as the local currency came under intense pressure and fell to a record low.

Chinese influence in the South Asian nation has been growing in recent years through loans and projects under its vast Belt and Road infrastructure initiative, raising concerns among regional powers and Western nations.

Between 2005 and 2015, Colombo borrowed billions from China, accumulating a mountain of debt for expensive infrastructure projects.

Sri Lanka was forced to hand over its strategic Hambantota port on a 99-year lease to a Chinese company in 2017 after it was unable to service the $1.4 billion debt from Beijing used to build it.