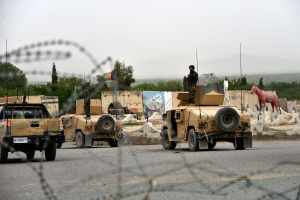 (AFP) - Britain is preparing to follow the United States in pulling its troops out of Afghanistan by September, according to a report Wednesday that was not denied by the government.

"We are working closely with the US, NATO allies and partners to support a secure and stable Afghanistan," a government spokesman told AFP in response to the report by The Times newspaper.

"Any change to our security presence will be made in agreement with allies and after consultation with our partners."

President Joe Biden plans to withdraw all US troops from Afghanistan before this year's 20th anniversary of the September 11 attacks, finally ending America's longest war despite mounting fears of a Taliban victory, according to US officials.

The Times said that Britain would follow suit in withdrawing its roughly 750 troops, citing sources as saying "they would struggle without American support because of a reliance on US bases and infrastructure".

At its peak, the UK troop deployment in Afghanistan numbered nearly 10,000, but is now largely confined to security duties in the capital Kabul.

Britain has also drawn up plans to hand over control to the Afghan government of a military academy in Kabul dubbed "Sandhurst in the Sand", The Times said.