Rise in Seychelles' currency should lead to drop in local prices, official says 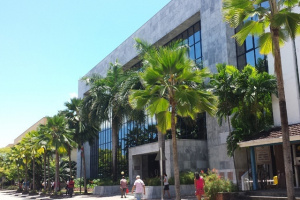 (Seychelles News Agency) - The price of commodities in Seychelles is expected to drop as the rupee appreciates against the dollar, said a top finance official on Tuesday.

The Seychelles' economy relies heavily on imports, therefore an appreciation of the domestic currency should translate into lower inflationary impulses and therefore a reduction in prices of goods and services.

The governor of the Central Bank of Seychelles (CBS), Caroline Abel, told a press conference that "for the year 2021, there has been more selling than buying of foreign currencies. To date, we have been able to accumulate $20.5 million. It has been there in the system. This is an indication that at a certain point, the foreign exchange rate would definitely have to decrease as there is a limit especially for banks to accumulate."

She said that Seychelles has a flexible exchange rate which means the market determines the price and if it is not functioning as it should as was the case last week it will collapse.

Abel however noted a positive outlook in general as there is more supply of foreign exchange for the month of March compared to January.

"When we look at the tourism sector when we opened for all visitors on the 25th March foreign exchange received was $8.6 million compared to January which was less than $2 million," she said.

Tourism which is the top pillar of the economy of Seychelles, an archipelago in the western Indian Ocean, was badly affected by the downturn in travel caused by the COVID--19 pandemic.

On the issue of inflation, Abel said that statistics published last week shows that inflation has risen to 9.59 percent compared to the same period of last year.

To date, the country's reserves stand at $540 million and the amount that can be used is $405 million. The calculation shows that this reserve will last the country for about 18 months.