After spike in poaching, efforts to protect seabirds on Seychelles' Aride island are increased 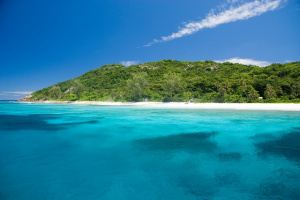 Following the resurgence in poaching events on Aride and in a kilometre of water surrounding the island last year, the Seychelles Coast Guard agreed to assist ICS with its anti-poaching programme. (Gerard Larose, Seychelles Tourism Board)

(Seychelles News Agency) - More anti-poaching patrols are taking place on Aride island and its surrounding waters through an agreement between the Island Conservation Society (ICS) and the Seychelles Coast Guard.

Following the resurgence in poaching events on Aride and in a kilometre of water surrounding the island last year, the Seychelles Coast Guard agreed to assist ICS with its anti-poaching programme to prevent and deter illegal taking of wildlife, such as seabirds.

The collaboration is now formal with the signing of a two-year Memorandum of Understanding (MoU).

The agreement says that ICS will carry out 24-hour daily patrols of the terrestrial area of the Aride, observe the presence and activity of vessels and persons in the designated marine area and report to the Coast Guard.

The Coast Guard will provide regular marine patrols of the designated marine area of the Special Reserve and will respond as appropriate, which can include intercepting poachers in possession of wildlife protected by laws governing special reserves.

The deputy chief executive of ICS, Shane Emilie, said that there are different reasons why the species in the reserve are being poached.

“One reason is linked to our culture - there are people who like eating fouke and as part of our culture, we consume bird eggs," said Emelie.

He added that stealing is also happening now that people are looking to make extra cash with the economic downturn caused by the COVID-19 pandemic.

Aside from poaching of birds and their eggs, ICS patrolling officers have also observed people fishing in the one-kilometre area surrounding the island designated as a protected area.

The vessels appear to be owned by Seychellois, said Emilie. He said ICS lacks the manpower to patrol the marine area especially when the sea is rough.

An operation’s officer at the Seychelles Coast Guard, Gerard Wong-Pool, said that “when personnel on Aride see illegal activities happening, they contact the coast guard that deploys an asset to investigate.”

Wong-Pool said that the Coast Guard will be patrolling the area around Aride and if people are seen doing illegal activities within this one-kilometre area, they will be apprehended.

Aride Island is the northernmost granitic island in Seychelles, an archipelago in the western Indian Ocean and over 1.2 million seabirds regularly breed on the island

Aside from the two shearwater species, there are at least eight other bird species that can be found on Aride. It is against the law to remove any of these birds or their eggs, be it on Aride or other protected islands in Seychelles, an archipelago in the western Indian Ocean.

It is also against the law to sell or buy any of these birds. People who see these illegal acts being carried out are asked to report the activities by calling 4375354.