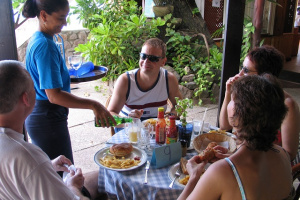 (Seychelles News Agency) - The COVID-19 pandemic has affected daily operations for businesses in Seychelles and led to a decrease in profits, according to the findings of a survey conducted by the Seychelles Chamber of Commerce and Industry (SCCI).

The survey asked 93 companies of all sizes from a wide range of sectors including tourism, transportation, arts, manufacturing, retail, and finance. The majority -- 85 percent -- were located on Mahe, the main of Seychelles, an archipelago in the western Indian Ocean.

The chairperson of SCCI, Oliver Bastienne, told SNA that "the pandemic has increased unemployment and several enterprises have had to make workers redundant. Between March and September 2020, 1,300 workers lost their jobs and 4,000 applications for migrant workers were cancelled," Bastienne said the survey showed.

SCCI is one of the oldest not-for-profit private sector institutions in Seychelles with ith over 1,000 members including enterprises and associations.

The survey showed the hardest hit was the tourism sector with revenues from the sector falling 61 percent last year because of a 70 percent reduction in tourist arrival.

In its recommendations, the SCCI has reiterated its call for economic diversification as it says the pandemic has once again shed light on the Seychelles' overreliance on tourism.

"Moving forward there is much urgency for the government to put in place the enablers to improve the ease of doing business which, we believe, will facilitate the development of a more diversified economy. SCCI recognises the government's vison to undertake this," said Bastienne.

In this line, Bastienne stressed the importance of social dialogue and consultation between the private sector and government in policy decision affecting business and workers at large.

"The country needs enabling policies to drive the economy, accelerate investment and create jobs," he added.

Another recommendation was the need to allow enterprises to have the flexibility to strategise, adjust and adapt in response to changing circumstances.

"SCCI continues to encourage and urge our members to explore all possible alternative options to maintain the viability of their businesses and livelihoods of the workers before resorting to lay-off or workers' redundancy. The latter are considered as last-option measures," said Bastienne.

He added that it was therefore important to ensure that laws and policies are catered to facilitate these changing needs so to avoid falling into no-option measures including business closures and retrenchments.

Seychelles recorded its first cases of COVID-19 in March last year and went into restriction of movement to control the spread of the virus. Several measures were also put in place by the government to provide financial support to the private sector some of which will end this month.

Meanwhile, the country is presently carrying out an intensive vaccination campaign to reach 70 percent herd immunity and re-open its borders on March 25.