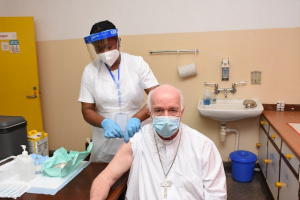 The vaccine is being administered eight weeks later than scheduled to people who received their first dose from January 26 to 31. (Seychelles Nation)

(Seychelles News Agency) - Seychelles continued its COVID-19 vaccination campaign on Monday with the roll-out of the second dose of the COVISHIELD vaccine for people above 60 years, said the Ministry of Health.

The vaccine is being administered eight weeks later than scheduled to people who received their first dose from January 26 to 31. The health authority increased the interval between the two doses as per the recommendation of the World Health Organisation (WHO).

The second dose was rolled out at five vaccinations centres on the main island of Mahe, including the district administration centres of Grand Anse Mahe, Anse Royale and Beau Vallon and at the International Conference Centre in the capital Victoria and at the Mont Fleuri Health Centre.

At the Grand Anse Mahe vaccination centre, by mid morning around 100 people had received their vaccines and the nurse in charge, Jeanne Legaie, told reporters that "today it is flowing very fast even if there is a large group. This is because there are no consent forms to sign so the process is easier."

Jeanne Bonnelame, 71, who took her second dose on Monday, told SNA that she arrived at the vaccination site at Beau Vallon at 7.40 am and there was a long queue.

"We were still waiting after 8 am and then a nurse came and explained that there was a problem and we had to wait some more. At around 9 am, a doctor came and then vaccination started but this time around it went really fast," she said.

Bonnelame said that she took the vaccine to protect her family and that she felt fine and had no adverse effects from the vaccine. She also accompanied her 87-year-old mother whom she said also felt fine.

She added that she took the vaccine to protect her family and is encouraging others to do the same.

The Oxford AstraZeneca vaccine, also known as COVISHIELD, was rolled out on January 26 for people above 60 years in Seychelles, an archipelago in the western Indian Ocean, in the second phase of the COVID-19 vaccination campaign.

The health ministry said in a recent interview that "research by the manufacturers, Oxford University (United Kingdom) and AstraZeneca, conducted in various countries highlights that the vaccine is more efficient if the interval between the two doses is longer."

Seychelles remains among the top countries globally to roll-out one of the fastest vaccine distribution programmes. According to figures released on Friday, 62,457 people have received a first dose which is 89 percent of the targetted population of 70,000.

Nonetheless, officials continue to ask the population to practice the different measures to stop the spread of COVID-19.

Seychelles has recorded a total of 3,828 cases and 18 deaths. There are presently 605 active cases.